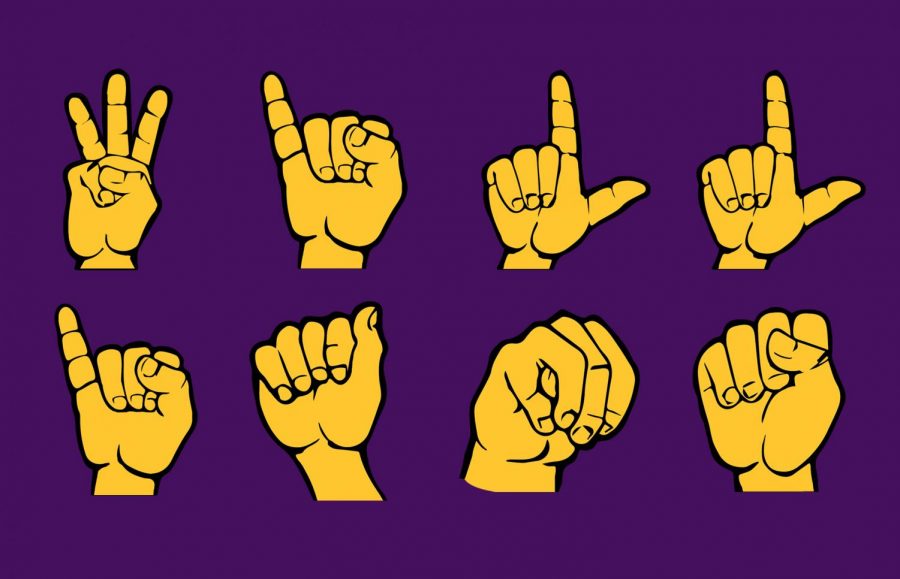 For the first time, two college students are enrolled in an online American Sign Language (ASL) course at Gallaudet University, offered to students as a result of efforts by the Office of Accessible Education (OAE) at during the summer to introduce ASL courses. at University.

In August, the OAE sent a form in Daily Messages asking students if they were interested in taking uncredited distance learning courses in fall 2021 or spring 2022 with Gallaudet, a university for the deaf and hard of hearing.

The form also asked students if they wanted to take ASL as a critical language for credit in the 2022-2023 academic year and assessed their interest in a free academic winter course on Deaf Culture. (Some members of the Deaf community prefer to capitalize the word “Deaf” in reference to deafness as a culture and reserve “Deaf” for hearing loss as a medical condition.)

Over 100 students responded indicating their interest. Associate Director of Intergroup Relations and Inclusive Programming at Davis Center Aseel Abulhab ’15, who worked with OAE to release the form, was surprised by the overwhelming response. Abulhab’s efforts to push the College to offer sign language classes began long before last summer, however.

The efforts of two alumni to bring ASL to College

When she was in high school, Abulhab started taking an ASL class at a local community college after seeing an interpreter on TV. “I was thinking [sign language] looked visually, aesthetically beautiful, â€said Abulhab.

But when she arrived at college as a student in 2011, she found that there was no formal opportunity to learn sign language.

To remedy this, Abulhab founded a club called Williams Signs. The club met regularly to study ASL, invited guest speakers to the college, and performed songs for the a cappella group Aristocows.

In her final year, Abulhab proposed to Sarah Bolton, then Dean of the College, to make sign language a critical language. Bolton was in favor and asked Abulhab to start a petition to gauge student interest. â€œWe have nearly a hundred [signatures]”said Aboulhab.” But then I graduated and [Bolton] left college and we weren’t able to take it to the next level.

After graduation from Abulhab, another Williams Signs member, Catherine Tan ’18, kept the club in business. Tan started learning sign language at the age of 15 when she was in a bicycle accident and temporarily lost some ability to speak. Before coming to college, she spent three summers at Gallaudet learning ASL.

Tan wasn’t sure how she would continue to get involved with sign language in college until she went to Purple Key Fair for her freshman year. “The [was] this stand which [said] â€œClub ASLâ€, and I lost my mind, â€she said with a laugh. “[I] I ran to who I later found out was Aseelâ€¦ and started signing with her.

Tan being already very proficient in sign language, she became vice-president of the club in the first year. â€œAseel and I would take turnsâ€¦ depending on who knew the vocabulary, and we would give introductory lessons,â€ she said.

According to Tan, however, it was difficult to progress in teaching ASL because the group of students who attended club meetings was constantly changing. â€œEvery time we had a meeting, we had to start over from the beginning,â€ she said.

Tan said she hopes formal, cohesive lessons will be more effective in developing students’ knowledge of the language. â€œLike any other language courseâ€¦ you have to be able to immerse yourself in it,â€ she said.

When Abulhab returned to College in January 2020 as a Davis Center Fellow, one of the first things she did was connect with OAE. At the same time, Tan was also working with the OAE to expand resources for deaf students. Abulhab and Tan struck up conversations with current students working at OAE, which ultimately led to this summer’s effort to introduce ASL classes.

For Yunjin Park ’23, one of the students working at OAE during the summer, the effort to introduce ASL classes came to fruition unexpectedly. Once Park and her colleague Elle Montoya-Kelner ’21 realized that it would be possible to enroll students as early as fall 2021, they began the hectic process of preparing for the launch of the initiative.

The first step was to choose a program. “As Aseel has worked with Gallaudet in the past, she recommended that we try [its] online program, â€Park said.

Next, Park and Montoya-Kelner had to determine the students’ interest in taking ASL courses. They created and submitted the Google Form, and spent a week sharing it with the students.

The biggest hurdle they faced was getting funding in a short period of time. “It’s about $ 1,000 to register [a student] in this online course, â€Park said. â€œTrying to see how much funding we could get from different departments, really at the last minute, was [a] challenge.”

Park and Montoya-Kelner were eventually able to secure sufficient funding from the OAE itself to enroll two students in the course. Going forward, however, Park expressed hope that more departments and offices, such as the Davis Center and the Office for Institutional Diversity, Equity and Inclusion, will help fund.

According to Gwyn Chilcoat ’24, a student enrolled in Cours Gallaudet, an ASL course at the College was long overdue. “It is an identity statement for deaf / hard of hearing students to show institutional support for the language,” Chilcoat wrote in an email to Save.

She stressed, however, that it is important for future courses to provide college credit. â€œASL I via Gallaudet is an intensive course,â€ she writes. â€œIt’s hard to keep up with that besides my other classes, extracurricular activities and jobs. “

Ari Quasney ’25, who is deaf, said he was thrilled with the interest in sign language in college and had a positive accessibility experience on campus so far. OAE provided them with an in-person interpreter for the first few days and a virtual interpreter for the lessons. They also appreciated the willingness of professors and students to wear transparent masks in class, which allow the movement of the speaker’s mouth to be seen.

â€œEveryone I have met so far has been so interested and so open,â€ Quasney said. “My JA [Junior Advisors], even before I arrived on campus, had taken the Deaf Culture training organized by the OAE, and they had learned to sign their names in sign language.

For Quasney, the students interest in ASL is particularly important because of the history of sign language in Massachusetts. One of the forerunners of modern ASL, Martha’s Vineyard Sign Language (MVSL), began to develop in the 18th century on the island of Martha’s Vineyard off the coast of Massachusetts among a population with a high rate of genetic deafness. Quasney lamented the fact that despite Massachusetts’ long history with sign language, educational institutions in the state had discouraged its use until recently.

“It’s a little crazy [that] most public institutions for deaf students still followed the policy of oralism, not allowing students to speak sign language, until the 1930s and 1940s, â€they said.

According to Quasney, one of the most important values â€‹â€‹for the deaf community is self-determination, which means, in their words, “being allowed to decide for yourself what language you want to speak, what community you want to speak to. identify, because of this long history of oppression.

Quasney stressed the importance of having deaf instructors for sign language classes, including future college classes. “To have a deaf instructor who can influence the curriculum taught, so that the values [of the Deaf community] reflected in the course, is really important, â€they said.