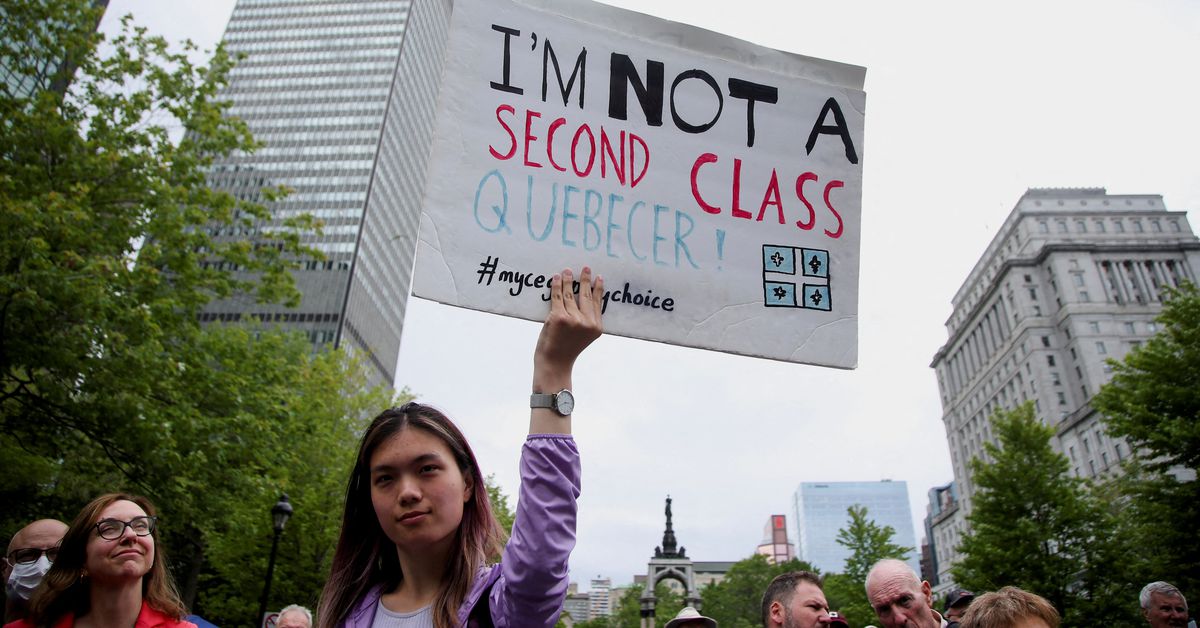 MONTREAL, June 12 (Reuters) – Quebec’s plans to attract more French-speaking newcomers are worrying some business owners who say they need immigrants from diverse backgrounds to cope with a tight job market in the Canadian province.

Unlike the other provinces, Quebec chooses its economic immigrants. The government has previously reduced the number of new permanent residents it brings in, relying more on temporary workers, and says it has increased the Francophone share of economic immigrants.

Premier François Legault’s Coalition Avenir Québec (CAQ) is determined to protect French, which he says is vulnerable in a predominantly English-speaking North America, ahead of the Oct. 3 election.

His government announced a new Minister of French and passed sweeping legislation requiring, among other things, that newcomers receive most non-health-related services in French after six months in the province.

As Legault campaigns to attract more French speakers, some business owners warn the move could discourage immigrants with essential skills. Quebec has the second highest job vacancy rate in Canada among the provinces.

Montreal entrepreneur Vince Guzzo, whose businesses include restaurants and cinemas, said he desperately needs dishwashers, no matter what language they speak.

“I would download an app… and my phone would translate it into Punjabi if I had to,” Guzzo told Reuters.

According to Statistics Canada data from the fourth quarter of 2021, Quebec accounts for nearly 40% of the approximately 81,000 job vacancies in the manufacturing sector in Canada. Manufacturing accounted for 12.6% of Quebec’s gross domestic product in 2021 – more than any other sector.

“We are not saying that French is not important. But this becomes a limiting factor when we seek to attract the best talent we need,” said Véronique Proulx, president of Manufacturiers et Exportateurs du Québec.

She called Quebec’s shift to temporary work a “band-aid” for labor shortages in the manufacturing sector. “We have companies considering closing production lines.”

Quebec Minister Jean Boulet, responsible for Labor and Immigration, said by email that his government had taken measures to attract foreign students and attract workers in priority sectors. He said the new law would include services to make learning French easier.

Quebec’s share of the total number of new permanent residents in Canada fell to about 12.4% last year, from 21.3% in 2012, according to government data.

Quebec also risks losing newcomers to other Canadian regions. About 16.3% of immigrants who arrived in Quebec in 2009 left for other provinces in 2019, nearly double that of Ontario, according to Statistics Canada data.

Quebec has always been a popular destination for immigrants to Canada. But changing criteria to make temporary residents permanent and long waits to obtain residency could discourage newcomers, said Rosalie Brunel, a Montreal-based immigration lawyer.

Legault wants Quebec to choose people who immigrate to join their families – a power held by Canada’s federal government – ​​so that it can select more French speakers.

The head of a manufacturer said the government wanted companies to recruit French-speaking workers.

Quebec said businesses can also look to alternatives such as automation.

“The dream is to have well-trained workers who speak French, but that’s not always realistic,” said Technosub general manager Eric Beaupré. Technosub, based in rural Rouyn-Noranda, Quebec, produces and repairs pumps for the mining and other sectors.

With a limited local workforce, Technosub is hiring more temporary workers from Latin America and the Philippines who need skills and are learning French on the job, he said.

Emmanuel Suerte Felipe arrived at Technosub as a temporary worker from the Philippines in 2018. His French is good enough for the job, but he is worried that he will succeed in obtaining permanent residency as he wants to bring his family to Quebec.

(This story refiles to correct typo in “plea” in title)

Reporting by Allison Lampert in Montreal and Anna Mehler Paperny in Toronto; Editing by Denny Thomas and Bill Berkrot

Is debt threatening to ruin your retirement before it begins? 4 tips that can help | Personal finance