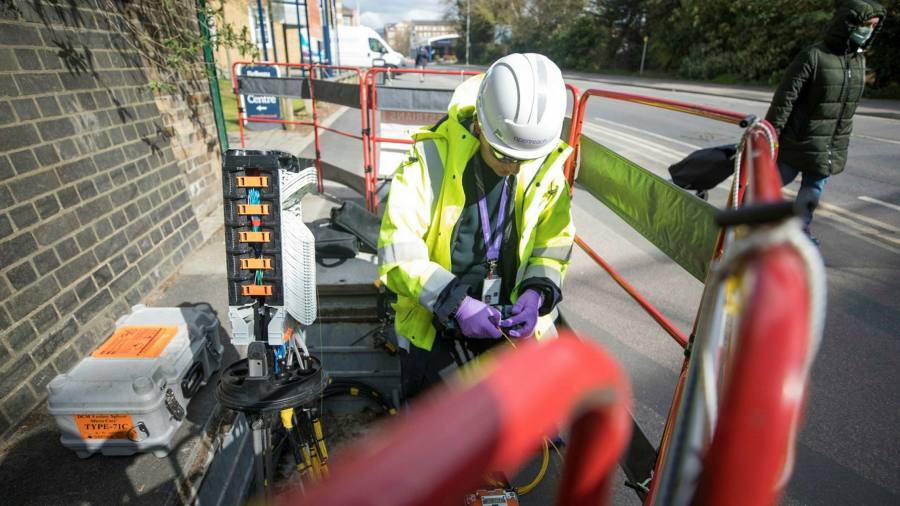 Britain’s ability to roll out superfast broadband across the country is being hampered by the “tortuous” process of recruiting workers from the EU after Brexit, the head of BT’s network business has warned.

Clive Selley, managing director of BT’s Openreach, the division responsible for rolling out fiber optic networks to homes, said countries like Portugal and Spain have plenty of people with the skills to speed up the delivery of ultra-fast broadband.

“They want the job, we want the skills and the Home Office has a torturous process,” Selley said in an interview. “We are limiting the rate of fiber building in the UK throughout the process.”

“If it was easier to get people in, I’d take a thousand tomorrow,” he said, referring to contractors rather than full-time staff. Portugal and Spain have the required skilled manpower as the countries are close to completing their deployment, he added.

Providing ultra-fast broadband is at the heart of the Conservative Government’s commitment to closing the digital divide and fixing the economy. Its latest manifesto outlined plans to deliver “full fiber and gigabit-enabled broadband to every home and business across the UK by 2025”.

The government is now aiming for 99% of homes to be connected by 2030. Selley said it was ‘completely realistic’ and ‘achievable’ for Openreach to lay fiber optic lines to 97% of homes across the country. countries by 2030, but would need more government support and subsidies.

Responding to criticism over difficulties in hiring EU workers, a Home Office spokesperson said: ‘We have a points-based immigration system and people are eligible to come if they meet the conditions.”

A government aide said ministers were growing irritated with businesses complaining about the system, which involves skilled workers being allowed in if they pass language skills and pay a fee, and said businesses needed to better to plan.

The stakes are high for BT after a slow start to upgrading its old copper lines allowed rivals including Virgin Media O2 and dozens of smaller challengers to begin their own rollouts in hopes of attract customers frustrated by the poor connection offered by their existing service providers.

These so-called ‘altnets’, backed by billions in private investors and banks, seek to either attract customers directly to underserved cities and rural areas, or sell their broadband through wholesale deals with telecommunications companies.

The slower BT rolls out the foundations of its super-fast network, the more it risks losing market share. Deutsche Bank analysts have warned they expect BT to see ‘material erosion on its part’, ‘particularly for the 50% of UK households where BT is [currently] effectively the monopoly of the fixed infrastructure provider”.

Although Selley acknowledged the challenge of rival companies, he expects the number of competitors to decline in the coming years.

“You can’t have hundreds of private companies, that’s just nonsense,” he said, adding that providing telecommunications services was “a game of scale” at its heart.

“It’s very clear that serious players are emerging and I have to take that very seriously,” Selley said. “Our answer is to build incredibly fast. . . then sell quickly.

Asked about continued speculation that Openreach could be spun off entirely from BT to crystallize its value for the parent company, Selley, who has run Openreach since 2016, said: “I’m not getting a vote on that.”

“What we do is not a cheap pastime and [BT] showed great confidence in us, with £15bn of investment, more than half of the group’s capital expenditure,” he said. “Right now it’s working well, we have stability and Openreach is a very healthy business with no constraints from the ownership structure.”

With additional reporting by Jim Pickard in London

Close to retirement? Here’s how to get rid of your debt before you leave work.