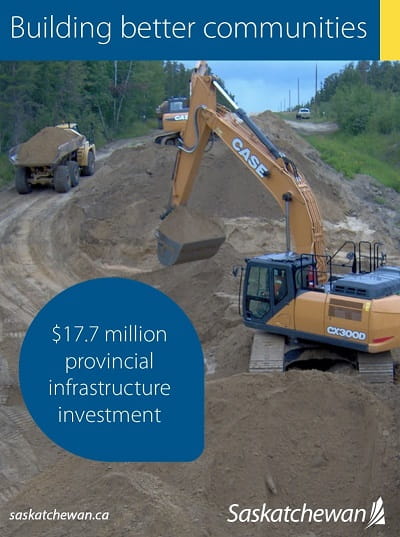 The town of Martensville, just north of Saskatoon, will benefit from the construction of a new community recreation facility. The center will feature a regulation-sized ice surface with spectator seating, a recreational ice surface with a skate changing area, as well as several other indoor areas including an artificial turf facility, rock climbing wall and a playground. The facility will also include publicly accessible multi-purpose rooms, locker rooms, restrooms and concession areas.

Several rural areas will also see significant infrastructure improvements. This includes bridge replacement to support the transportation system in the rural municipalities of Meota #468, Miry Creek #229 and Mount Pleasant #2, as well as the decommissioning of a landfill in Mankota #45 to help protect the environment.

By investing in infrastructure, the Government of Canada is growing our country’s economy, building the resilience of our communities and improving the lives of Canadians.

“Investments in infrastructure help create healthy, connected and resilient communities. Once these projects are complete, residents of Martensville will be able to stay active in a new multi-use facility, and residents of Muskoday First Nation will have a dedicated space to promote and pass on their cultural traditions. Working with our partners, our government will continue to support rural and Indigenous communities across Saskatchewan,” said Intergovernmental Affairs, Infrastructure and Communities Minister Dominic LeBlanc.

“The Government of Saskatchewan is proud to invest more than $17.7 million in these shovel-ready infrastructure projects that will increase recreational and cultural opportunities, protect the environment and improve the transportation system,” said said McMorris. “These investments in local infrastructure will continue to strengthen our communities and benefit the citizens of Saskatchewan for years to come.

English and math test results in the wake of COVID