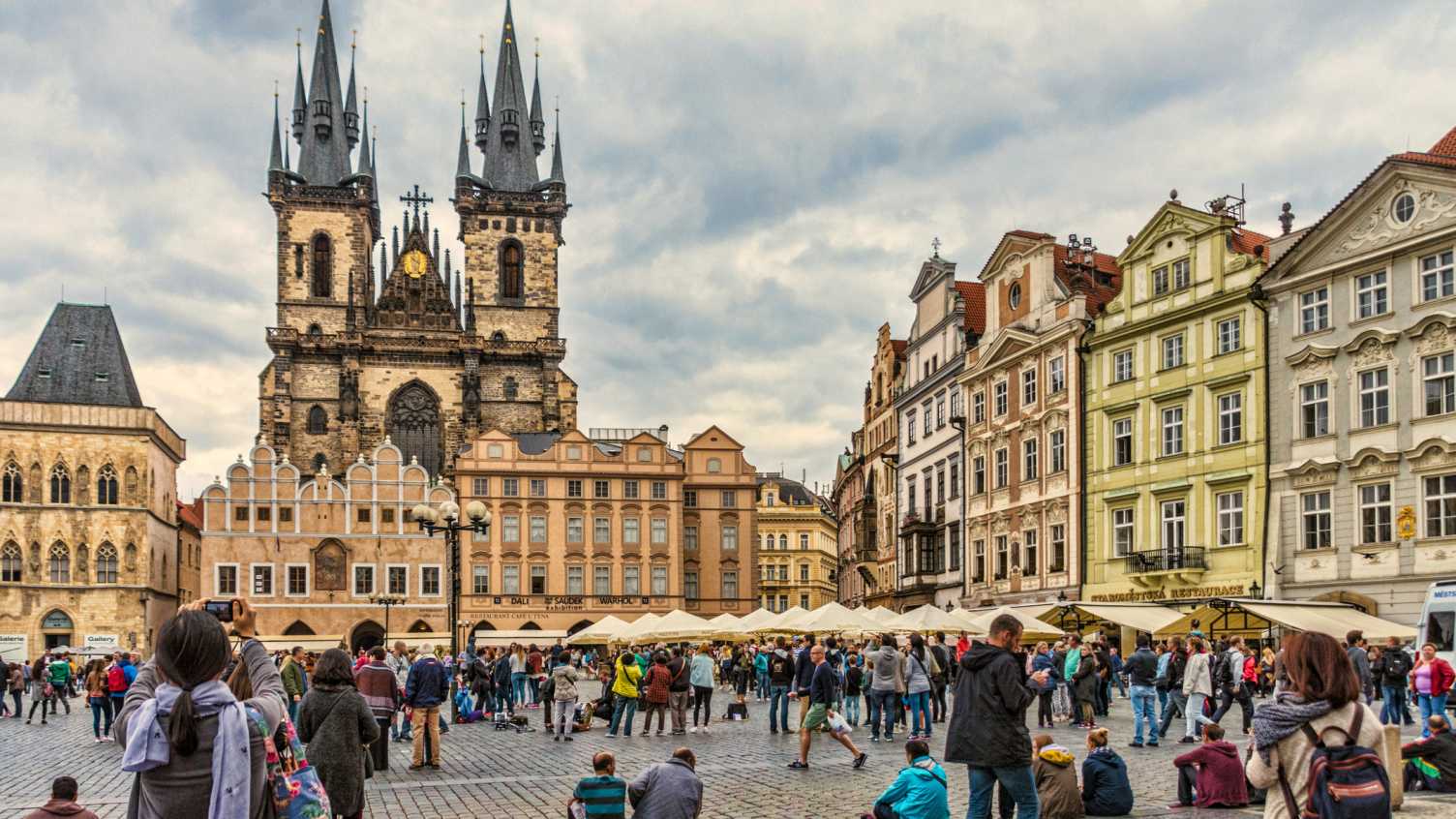 As the Czech Republic takes over the EU Presidency this month (July 2022), the University of Sheffield is celebrating its friendship with the country, being the largest provider of Czech language degrees in the UK.

The EU Presidency, entrusted to a different Member State every six months, plays a key role in defining the general political direction and priorities of the European Union. During its presidency, the Czech Republic is expected to focus on priority areas, including the war in Ukraine, energy security, strengthening Europe’s defense capabilities and the economy.

Czech is the official language of the Czech Republic – spoken by more than 10 million people – but outside the country there is a shortage of people who are fluent in the language.

With many large international companies present in the central European nation, which borders Austria, Germany, Poland and Slovakia, such as Hyundai, Vodafone and European energy giant Alpiq, there is a demand growing number of people who can speak Czech fluently. Those who can combine Czech with native-level English and other European languages ​​are highly sought after in business and government, one of the founding principles of the EU being multilingualism and the ability to communicate with citizens in their own language.

In the UK, around a dozen students graduate every year in the Czech language, which means those who speak Czech have a truly unique skill to offer employers, both in the UK and across Europe. .

The University of Sheffield has been teaching Czech as a modern language for nearly 50 years and is one of only four universities to teach Czech in the UK. Sheffield has the highest number of students learning the Czech language of any UK university.

Most students who study Czech in Sheffield learn it alongside some of the most widely spoken languages ​​in Europe, such as Dutch, French, German, Italian, Russian and Spanish. Along with languages, students also study each country’s history and culture, giving them an in-depth understanding of each nation – crucial for building and maintaining international relations in a post-Brexit Europe.

A member of NATO, the Czech Republic occupies a key strategic position in the heart of Central Europe. It is the headquarters of major international companies such as Škoda, whose cars are sold in more than 100 countries, and ČEZ, the largest utility company in the Central and Eastern European region. Teaching students to be fluent in Czech gives Sheffield graduates a unique skill to offer employers in the UK and across Europe.

The School of Languages ​​and Cultures at the University of Sheffield also has a strong background in Slavic Studies – the languages ​​and cultures of Central and Eastern European countries. The resulting knowledge and expertise could be particularly useful to the UK and EU as Europe responds to the war in Ukraine and the impact it is having on the surrounding region.

Professor Neil Bermel, Director of Czech Studies at the University of Sheffield, said: “Czech is a fascinating language spoken in the heart of Central Europe. For a language spoken by relatively few people globally, this is incredibly important and even more so now with the Czech Republic’s role in NATO and the European Union.

“The UK is widely recognized as having a language deficit: we assume everyone speaks our language and we don’t learn theirs. As a result, UK businesses are more reluctant to enter overseas markets because they either don’t understand them or don’t have the staff who can help them learn how to do so. This affects our ability to export and import goods, which is particularly important after Brexit, and makes it more difficult for the UK to react with agility to international developments. Our graduates are specialists in “big” languages ​​such as German, Spanish and French, but also in the languages ​​and cultures of other highly industrialized and competitive economies in Europe, such as the Czech Republic; they are essential to help revive our economy and our place in the world.”

Professor Bermel added: “The war in Ukraine is also placing increasing importance on the study of Slavic languages ​​and cultures, as its fallout impacts the wider region of Eastern and Central Europe. Understanding the languages ​​and cultures of each country is going to be crucial for Europe’s response. For example, our graduates instinctively understand why the reaction to Russia’s invasion was so visceral and acute in Central and Eastern Europe: they have lived in countries that were client states of the Soviet Union and suffered invasions Warsaw Pact troops within living memory. They also have the language skills to help with current arrivals from these countries. They are a real resource in guiding the UK through the current crisis.

“One of the strains that runs through our research here in Slavic Studies at Sheffield is the multilingual and multinational influences that permeate Slavic countries. Sometimes it’s about mapping the interactions of foreign cultures in Czech lands, as my colleague Luděk Knittl and I have done with the language of heritage sites, and sometimes it’s about highlighting the role center of Czech scholarship and science and the contribution of Czech data to a field of research, as we did in our recent UKRI-funded grant on morphology.

While learning Czech, students from Sheffield have been able to take part in several projects that have had an impact in both the UK and the Czech Republic.

Students studying Czech in Sheffield translated a Czech WWII legionnaire’s diary for his English-speaking daughter, helping her learn about her father’s service in Poland, the Soviet Union for the first time. , Turkey, Israel and Africa.

Czech students from Sheffield have worked with a zoo in Brno – the second largest city in the Czech Republic – to create an app for English-speaking children, so they can learn more about the animals on display.

University students translated the subtitles of two Czech documentaries by Věra Chytilová, a pioneer of Czech cinema, allowing them to be shown at the British Film Institute and then at a film festival in Munich. The students also translated two Czech plays so that they could be performed in the UK.

Sheffield graduates have gone on to develop successful careers, using their language skills, both in the UK and in the Czech Republic.

Aaron Bohlman, a Modern Languages ​​graduate from the University of Sheffield, said: “I studied Czech in Sheffield alongside French and Spanish, and graduated in 2013. I have enjoyed my degree in Czech so much, from castle stays to summer internships one month. After graduating, I moved to Prague for several years and worked at a tech startup, before returning to the UK where I now work as a full-time Czech translator.

“I think learning any language is invaluable because it opens up opportunities that would otherwise not be available to monolingual people. Speaking a foreign language allows you to cultivate relationships with people, with the added respect of doing so in their language, without expecting them to speak English.

“When it comes to Czech, learning any Slavic language is a gateway to others because of their similar grammar and vocabulary. Thus, as a Czech speaker, I can understand Slovak without too much difficulty and I am well placed to learn Russian, Polish or another language of the region. There is also a special joy in learning a language with relatively few speakers. I had a rich range of experiences through my study of Czech, none of which I could have predicted in advance.

Jenny Taylor, who also studied Czech at the University of Sheffield, said: “I was the first Erasmus student from Sheffield to attend Charles University in Prague – one of the oldest universities in Europe. I was nervous at first, but ended up moving to Prague after the After graduating, I lived there for about eight years and have worked as a freelance Czech translator since 2006. I also spent my last academic year teaching an undergraduate Czech translation course in Sheffield, the Loop is therefore closed!

“If you’re tempted to learn a language but don’t know which one, why not step out and learn one that’s a bit more specialized? Travel enriches your life and knowing other languages ​​enriches your soul. If you thought about it for a moment, go for it! The Czech Republic is a prosperous country in the EU and a wonderful place to live.

In addition to Czech language degrees, Sheffield also teaches Czech to students in non-language courses, university staff and members of the public through its Languages ​​For All initiative at its Modern Languages ​​Teaching Centre.

Students can study Czech from beginner to advanced level – equivalent to level C1 of the Common European Framework of Reference for Languages.

Sheffield Czech Studies scholars also play a key role in building relationships within the city’s Czech and Slovak community by running a Czech and Slovak society. The society is open to anyone interested in Czech and Slovak language and culture and organizes regular events, such as film screenings, lectures and family events throughout the year.