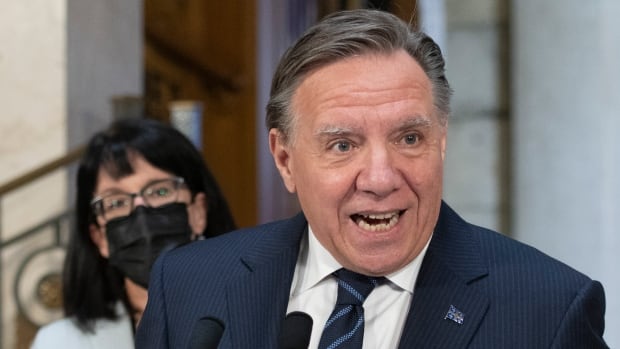 Fed up with protests in schools and hospitals, Quebec premier prepares special law

Quebec Premier FranÃ§ois Legault says he will introduce a special bill to prevent anti-vaccination protests in front of places like schools and hospitals because his “patience had reached its limits.”

“It is important to leave our children and our patients in peace,” Legault told a group of journalists at the Quebec National Assembly on Wednesday.

“It doesn’t make sense that [people] try to intimidate our children.

Since school resumed last month, five such protests have taken place outside elementary and secondary schools in Montreal, voicing their opposition to vaccination mandates and other COVID-19 public health measures. Others were held outside hospitals.

Liberal opposition education spokesman Marwah Rizqy had drafted a bill to discourage such demonstrations in front of schools, but the prime minister wants a new law to also apply to clinics, vaccination centers and day care centers.

Legault said he would present a bill to his caucus on Wednesday afternoon before tabling it in the Legislature. He says he hopes other parties will support it so that it can be passed as early as Thursday.

Earlier Wednesday, the three main opposition parties said it was unacceptable for protesters to approach children, urging them to disobey public health orders and not get vaccinated. They say they are ready to work with the government to pass the law quickly.

However, for the bill to pass so quickly, the government will also need the approval of the only Conservative Party of Quebec MP, Claire Samson, who was vague about her position.

“I’m not against the principle,” she said, explaining that she believes society should protect people who want to go to hospitals and schools. “I don’t think it’s okay to try to bully or influence kids.”

But she expressed concern that the bill would inadvertently restrict other protests and said she was waiting to see its wording before making a decision.

“We will wait to read what the government proposes,” she said. â€œIf it’s a special law, how far will it go? Are we going to stop nurses from doing sit-ins outside of hospitals?

The scope of the bill remains unclear. There are already provincial laws that prevent people from blocking access to schools, hospitals and clinics.

Likewise, obstructing access “to places where health or social services are provided” may, under the Act respecting health and social services, result in fines of $ 250 to $ 1,250 for individuals and individuals. from $ 500 to $ 2,500 for legal persons.

Quebec also banned demonstrations within 50 meters of abortion clinics in 2016.

Gabriel Nadeau-Dubois, parliamentary leader of QuÃ©bec solidaire, said his party would support such a bill but, like Samson, warned that he did not want him to ban other types of demonstrations outside of schools, such as parent protests that support public education.

GeneviÃ¨ve Guilbault, the province’s Minister of Public Safety, said the bill will be balanced and protect the right to protest.

Heidi Yetman, president of the Provincial Association of Teachers of Quebec, said she would not oppose a law limiting anti-vaccine protests in front of schools.

â€œI think it’s really important that we don’t take away the rights of protesters to voice their opinions,â€ said Yetman, whose association represents teachers in English-speaking schools, in an interview on Wednesday.

“But at the same time, these anti-vaccines demonstrating in front of hospitals and schools, for me it’s very dangerous. Let’s keep them away from buildings where children need to have access, patients need to access. . “

Nancy BÃ©dard, president of the Quebec Interprofessional Health Federation, the largest nurses union in the province, said in a statement that the right to protest is fundamental but that healthcare workers, patients, students and school staff should not be intimidated.

Pearl Eliadis, a human rights lawyer who teaches at McGill University, said a law banning anti-vaccine protests in front of schools and hospitals would limit the constitutional right to peaceful assembly.

“The problem is not really freedom of speech,” she said in an interview on Wednesday. “Nobody tells them that they can’t say things. That’s right where they say it.”

If the law were challenged, she said, the government would have to demonstrate that the legislation is a reasonable limit on the right to peaceful assembly and that it prevents those exercising this right from harming others.

“I think there is a strong point to be made that children, especially underage children, should not be intimidated or scared to go to school under any circumstances,” Eliadis said. “If you are a patient entering a facility, or attempting to enter a facility, and you have been intimidated or frightened, your right of entry has been diminished.”

Learn Python, one of the most popular coding languages, for $ 30

Schools prepare for the arrival of refugees