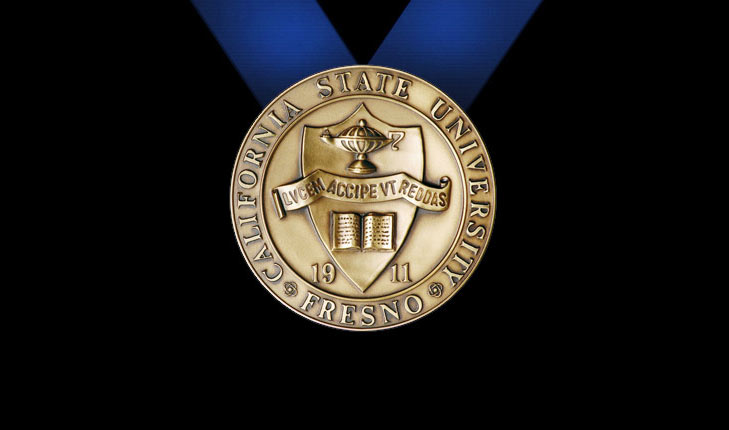 Fresno State’s eight schools and colleges, along with the Division of Student Affairs and Enrollment Management, have each selected an outstanding student to be honored as part of the 2022 class of Deans Graduate Medalists.

The deans selected a graduate and undergraduate medalist based on academic excellence, community involvement, and other accomplishments. The Fresno State Undergraduate Deans Medalists were announced on April 27.

In mid-May, one medalist from the group below will be announced as a Graduate Medalist, Fresno State’s highest academic honor for a graduate student.

This year’s medalists are:

Joseph Calcagno, of Coarsegold, earned his Executive Master of Business Administration with a 4.0 GPA. He previously earned master’s and bachelor’s degrees in biomedical engineering from California Polytechnic State University, San Luis Obispo. Calcagno sought an executive MBA to prepare him to take on leadership roles in his work with orthotics and prosthetics. Calcagno pledged to step out of his comfort zone when the pandemic hit to ensure he and his colleagues could get the best possible experience in the accelerated virtual master’s program. He has collaborated with other members of his cohort, set up study groups, and led group projects resulting in meaningful relationships and a successful academic experience. He did all of this while working full time and having recently welcomed a new baby into his family. Calcagno looks forward to using his new knowledge to have a deeper impact in his organization and the community. He is excited to have more time to spend with his growing family and plans to pass on his business knowledge to his sons by starting a small family business in his spare time. 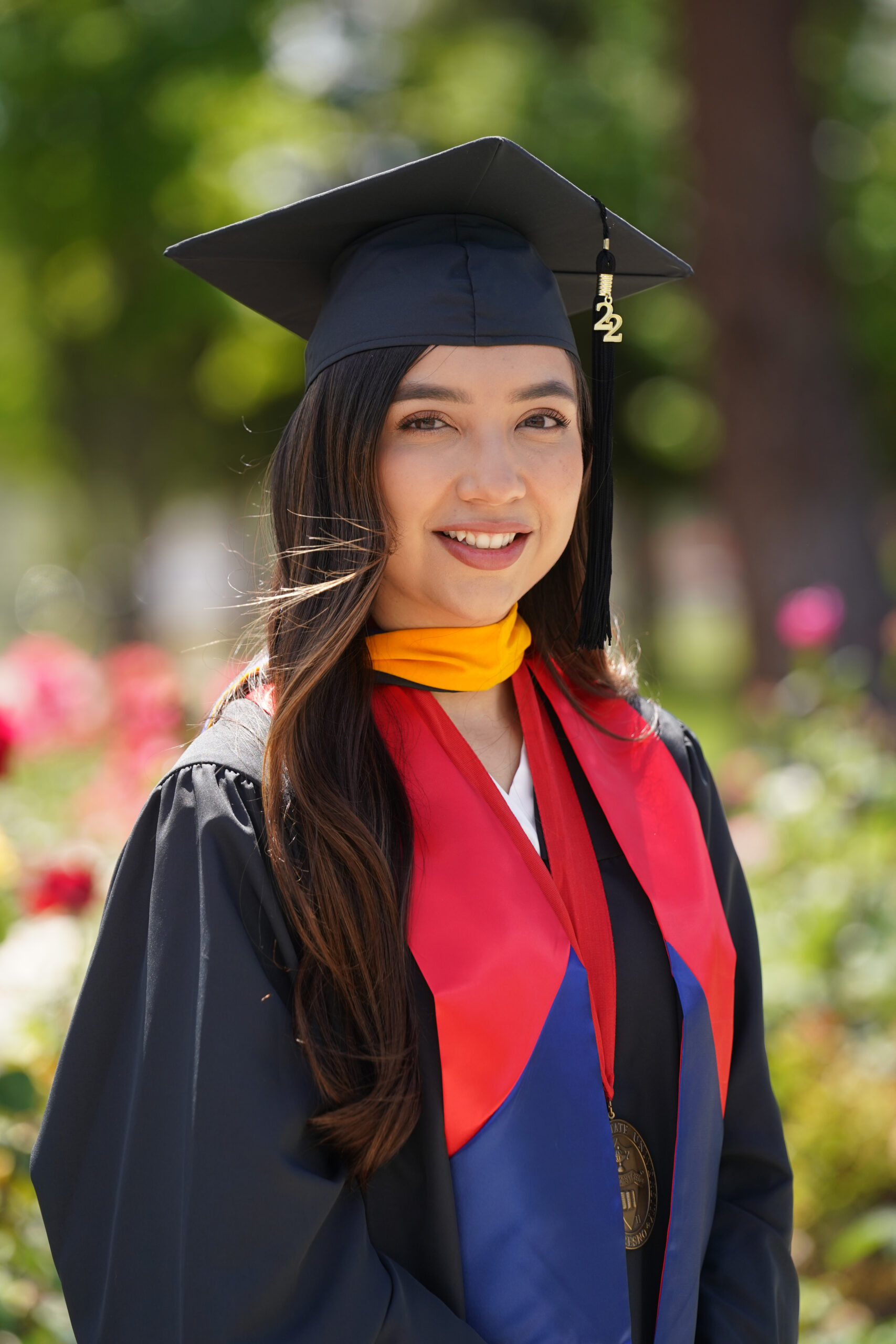 Tania Castillo, of Fresno, earned her master’s degree in criminology with a 4.0 GPA. She previously earned her BS in Criminology at Fresno State. Castillo came to the United States from Mexico seven years ago to pursue higher education and better life opportunities. She aspires to serve and give back to the community. Her exposure to the criminal justice systems of other countries and its effects on vulnerable populations led her to study criminology. In Fresno State, Castillo serves as president of Alpha Phi Sigma, a criminal justice honoring organization that participates in community service events, college conferences, and provides networking opportunities for its members. She has volunteered with the Citizens’ Advisory Council on Public Safety for the City of Fresno and is a full-time immigration liaison with the Mexican Consulate. Her goal is to become a professor of criminology and conduct research that informs evidence-based policy.

Joey Contreras, from Selma, graduated with a Masters in Physics with a 4.0 GPA. He previously earned his BS in Physics from the University of California, Santa Barbara. When Contreras started at Fresno City College, his son was diagnosed with stage 4 liver cancer. The single father spent the next two and a half years with his son undergoing treatments and an overnight stay at Valley Children’s Healthcare while working hard to maintain his grades. His son recovered and he transferred to UC Santa Barbara to complete his bachelor’s degree. Contreras returned to Fresno to be closer to his son and family and entered the master’s program in physics en route to a doctoral program. He participated in research on quantum gravity, published a journal article and gave lectures on his research. Contreras was also a teaching assistant in various laboratories, including introductory astronomy, physics, and natural sciences. After graduating, Contreras will teach a summer course at Fresno State. He will then continue the doctoral program in physics at the University of California, Merced. 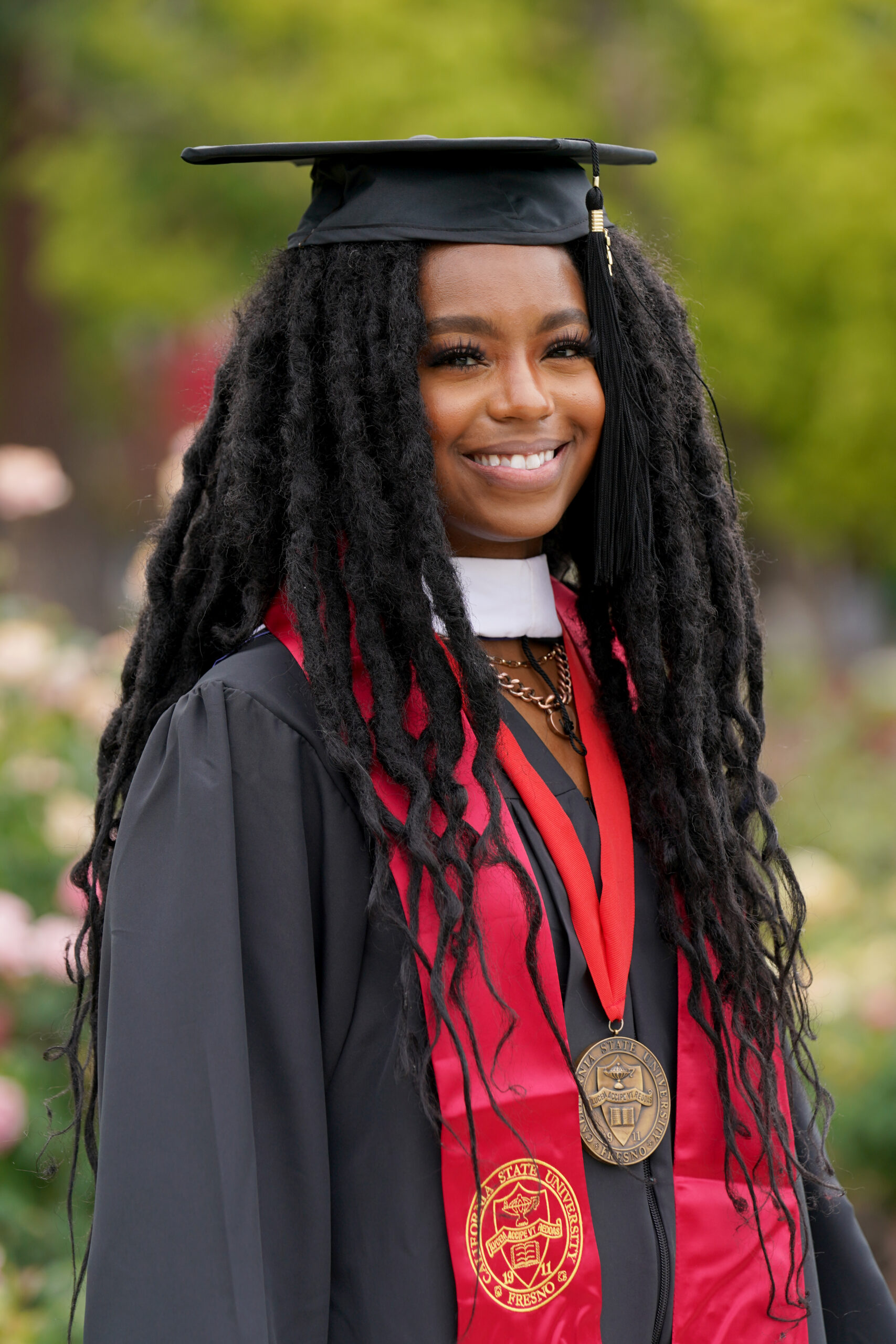 Audia Dixon, of Fresno, graduated with an MFA in December with a 4.0 GPA. She previously earned her BA in Art at Fresno State as a transfer student from Fresno City College. Originally a liberal arts major, Dixon turned to art and called it the best shot she could have made. Dixon was inspired by contemporary black artists and motivated by the late Professor Paulette Fleming to express her own vision of black identity. In Fresno State, Dixon designed covers and posters for the African American Launch Ceremony program and collaborated on mural projects that promoted black empowerment and injustice. His first mural project was the “Lift Every Voice Mural Tour” organized by Dulce Upfront, a multimedia arts collective, in response to the George Floyd protests. She was then asked to design another mural created by black women artists from the Central Valley. She plans to continue working as an artist and would like to teach art. Her goals include finding a residency for research and applying to an MFA program. 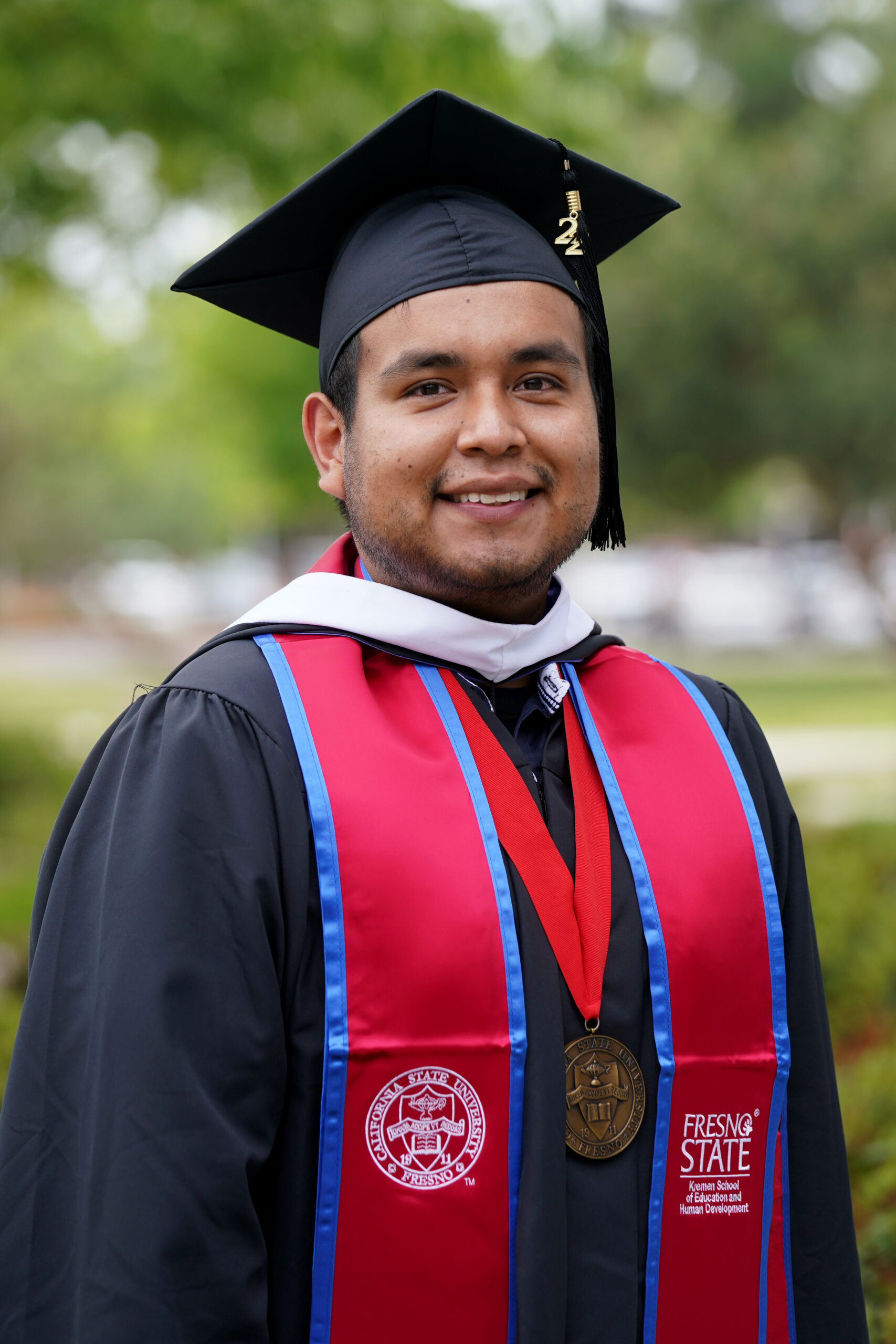 Saúl Pamatz Melgarejo, from Fresno, graduated with a Masters in Multilingual Multicultural Education with a 3.9 GPA. Previously, he earned his bachelor’s degree in Spanish and a minor in Communication Science and Deaf Studies from Fresno State. Melgarejo is a first-generation and formerly undocumented student, migrant, and English student who is dedicated and committed to helping linguistically and culturally diverse learners and their families achieve success. As a new dual immersion teacher, he saw a need in the K-12 system for students to have mentors they could relate to. During his graduate studies, he acquired critical analysis skills to better understand the holistic components behind culture and the importance of working for accessibility and equity. He demonstrated these skills in a research project titled “Undocumented Travel: Pathways to Higher Education in Uncertain Political Times.” Melgarejo was awarded the Rutherford B. Gaston Family Sr. Scholarship to help with his studies.

Jaklin Rowley, from Exeter, graduated with a Masters in Civil Engineering with a 4.0 GPA. She previously earned her BS in Civil Engineering from Fresno State. Rowley’s work in engineering aligns with her family of builders and developers. She hopes to one day join their efforts, but until then, Rowley wants to gain expertise in her field while pursuing her passion for teaching. She served as a Fresno State associate teacher and student assistant while also working as an engineering intern at the City of Visalia. His graduate research focused on structural health monitoring, with an emphasis on the application of vision-based sensing. She has been involved in leadership and student clubs and organizations. She received the 2020 All-University Leadership Award for Outstanding Club President. Rowley was offered a full-time engineering job with the city of Visalia after graduation. She plans to pursue a PhD in Civil/Structural Engineering, preferably abroad so she can gain global experience. 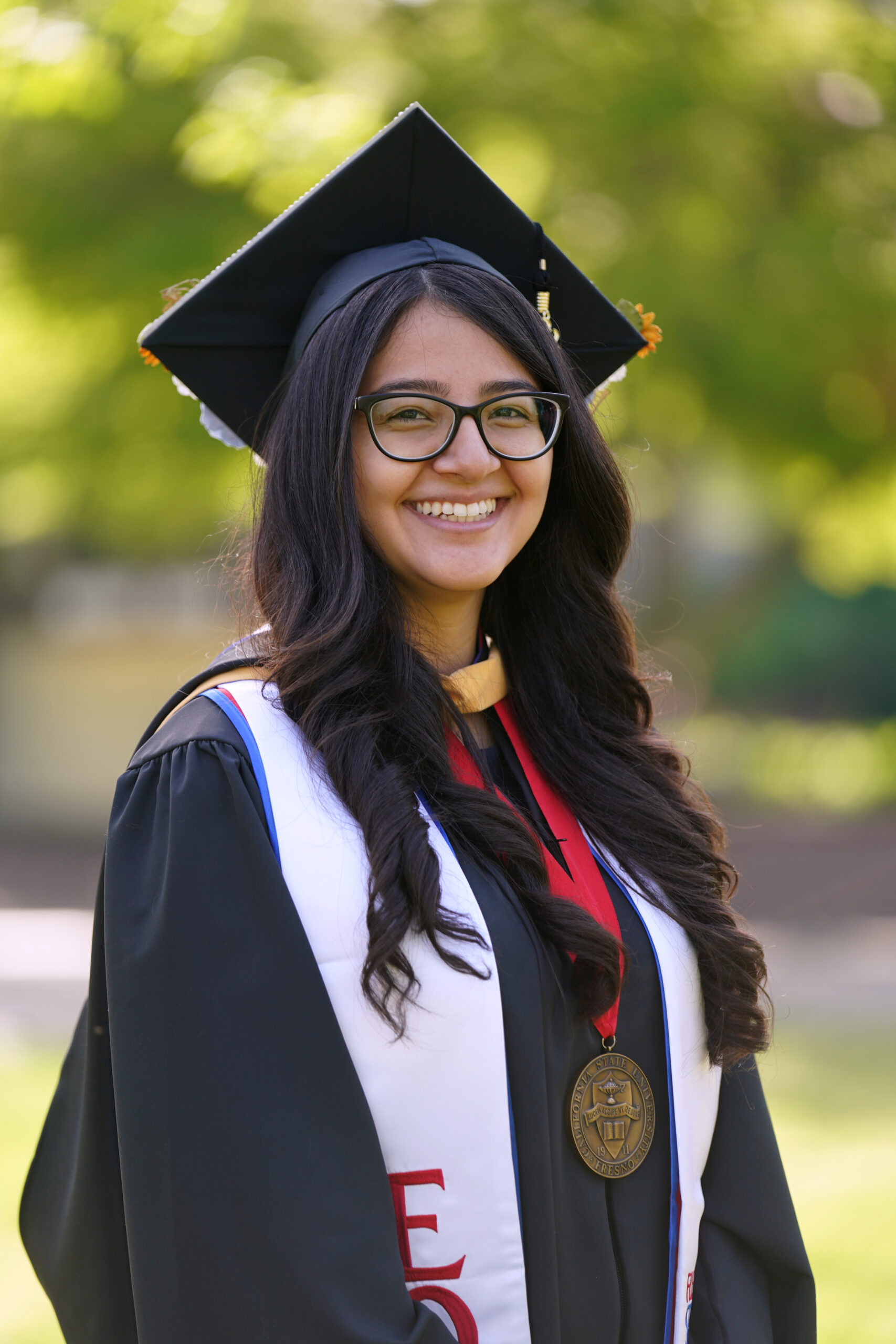 Tania Sanchez, of Fresno, earned her master’s degree in counseling, an option in school counseling, and a student personnel services diploma with a 4.0 GPA. She previously earned a BA in psychology, minor in communications, from Fresno State. Sanchez is the youngest of four children born to Mexican immigrants and the first to pursue higher education. Her passion for helping students and families in the community fuels her academic journey. She is a trainee counselor in the Educational Opportunities Program and works with low-income, first-generation students. Sanchez is also an ambassador for the school counseling program as the first recipient of the Dr. Benjamin and Marion Kremen Scholarship. She helped host EOP’s Connect Day Campus Tour event and special programs for incoming students. Sanchez has completed a graduate research project promoting safe and responsible use of digital technologies. After graduation, she hopes to work in higher education or K12 as a school or school counselor. She would like to pursue her doctorate in instructional leadership and become a counseling professor to help train tomorrow’s top performing counselors. 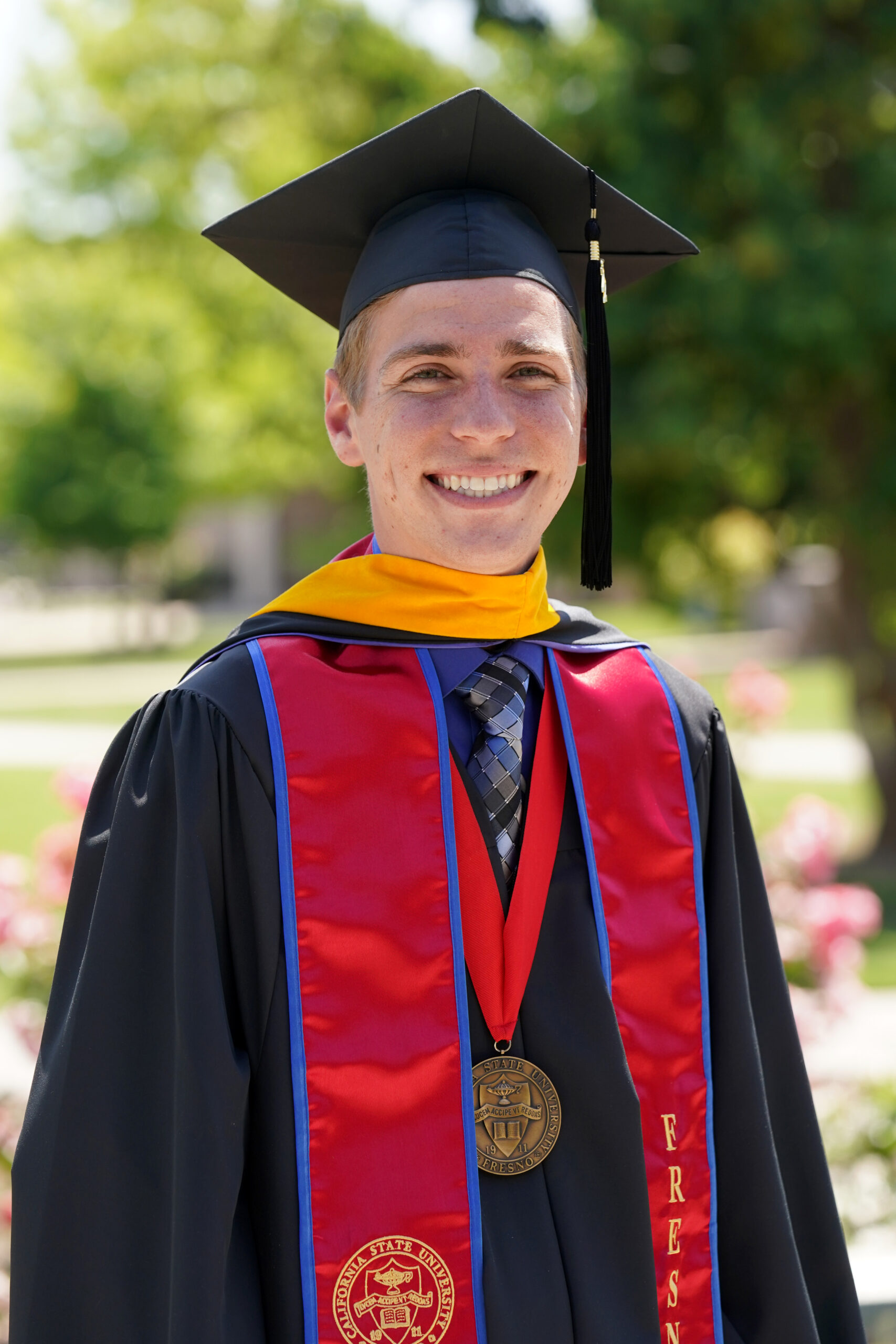 Cameron Standridge, of Hanford, earned his Masters in Agricultural Science, Single Subject Diploma and Agricultural Specialist Diploma with a 4.0 GPA. He previously earned his BS in Agricultural Education at Fresno State and was the 2020 Deans Undergraduate Medalist for Jordan College. Standridge is passionate about creating impactful educational experiences for students. He was part of the Jordan College Honors Program and received the Jordan Harvey Graduate Assistantship. He has served as co-director of two summer campuses for agricultural kids, collaborating with peers, faculty, and staff to create two weeks of interactive agriculture lessons. He also developed a virtual agricultural discovery program for high school students nationwide and worked with teachers to develop an agricultural career readiness skills certificate program for students across the country. Standridge served as associate professor for the lab portion of swine production and served as a student teacher at Central High School and Madera South High School. He hopes to continue to impact students and develop new ambitions that will support agricultural education.

Rebekah Weimer, of Fresno, earned her master’s degree in kinesiology with an option in sports psychology with a 4.0 GPA. She previously earned a BA in Psychology, with a minor in Human Development, from the University of California, Davis. Weimer began his trip to Fresno State in the fall of 2020 while classes were still online due to the COVID-19 pandemic. Her thesis was a case study with a community college football team in which she investigated how well athletes can learn specific mental skills and use them in training. There have been many setbacks due to the pandemic. One team (the control group) dropped out of the study, and the team that completed the intervention changed the data collection period twice, requiring Weimer to change the format of their case study. Weimer is a teaching assistant for two kinesiology activity classes, is active in the Sports Psychology Club, and is a member of the Phi Kappa Phi Honor Society. She also works as the resident manager for Fresno State Student Housing. Weimer plans to pursue a second master’s degree in clinical rehabilitation and mental health counseling. Her goal is to become a certified mental performance consultant.

Impact of COVID-19 on Online Payday Loans Market Share, Size, Trends and Growth from 2022 to 2031 – themobility.club

How to Get Discounted Language Training, Cheap Flights, and Travel Hacking Tips