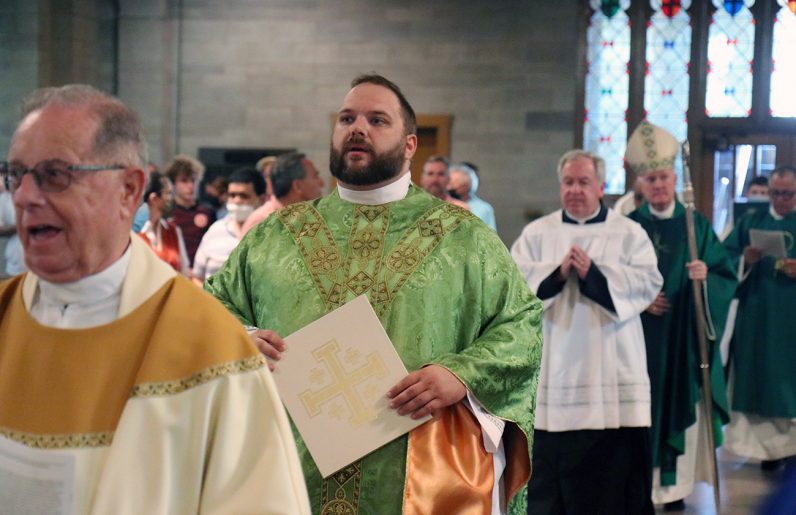 This month, several parishes in the Archdiocese of Philadelphia are welcoming new pastors and celebrating installation ceremonies.

One such parish is St. Ambrose, which for nearly a century served its lower northeastern Philadelphia neighborhood and served as a Catholic landmark at the southern end of Roosevelt Boulevard.

The installation of Father Charles Ravert as parish priest of Saint-Ambroise on Sunday, September 12, chaired by Auxiliary Bishop Michael Fitzgerald, was remarkable because most parishioners never thought it would happen.

(See a photo gallery of the Mass installation.)

Mass attendance had been low for years, religious education had declined, the school had closed years earlier, and ministries were few. This was all due to the reality of a changing neighborhood with fewer practicing Catholics – a trend reflected in many communities in the Philadelphia area.

Parishioners were convinced or at least suspected that the parish would close in July 2020 after the retirement of their longtime pastor, Father James Catagnus.

Parish staff resign to look for other work and parish buildings are sold.

But there were seeds and some seeds of growth, signs of hope for a possible future: the sale of unnecessary buildings would ensure financial stability, and the number of Spanish-speaking Catholics, including many young families in the neighborhood, was increasing. 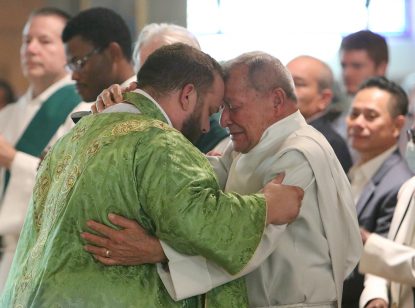 Father Ravert and retired deacon JosÃ© Mendez, who served in Saint-Ambroise for 32 years, share a tender and moving moment.

Yet when Father Ravert arrived as the new administrator last July, it came as a surprise to parishioners.

When the young priest, ordained in 2014, arrived, he saw around 25 worshipers attending a Saturday evening and a Sunday mass, and about double that for a Spanish mass.

And he had nowhere to lay his head at the end of the day. The presbytery and the convent had been sold.

So, with blankets to sleep on the floor and a fan to beat the July heat, he settled into a 1960s high school classroom for the first two weeks until volunteers rearranged the room. space in lounges.

He then went to work serving his parish, getting to know people, offering the sacraments, forging relationships.

“It has been a crazy year and a half,” said Father Ravert of his new mission in which he was “here to bring a message of hope, that it was not the end but a new beginning”.

Amid the pandemic’s restrictions and widespread shutdown rumors, Father Ravert detected “a spiritual depression” among the people, “and they stayed away,” he said.

He began to use his youthful energy, boundless enthusiasm and Spanish language skills to breathe new life into the parish.

â€œIt’s an exciting timeâ€ in Saint-Ambroise, said Brown before the installation mass. â€œFather Charles is very enthusiastic. He is young with a lot of energy.

She was expecting around 60 PREP students this year after enrolling the following night, September 13.

â€œWe couldn’t do (PREP) last year because of COVID,â€ she said. â€œNow that we have a new pastor, he wanted to start a new program after a year of absence, with the closures. I can’t wait to meet more children. Looks like it’s gonna be good.

Another youth outreach program is starting in St. Ambrose with another new hire a year ago, a young woman who joined the St. Ambrose family as a kindergarten. 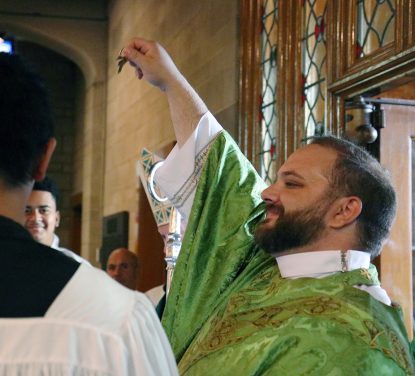 Father Ravert shows the congregation what they already know: he does have the keys to the church.

The numbers prove what Tejada sees. Those two dozen attendees at weekend masses have grown to around 200, and the 50 Spanish-speaking people at a weekly mass have only standing places, according to the pastor.

For older parishioners who have seen great changes in population and demographics for over half a century, the rebirth of Saint-Ambroise is encouraging.

Life member JosÃ©phine Lavorini praised the work of her new parish priest because â€œit involves many members of the parish in activities. He actively seeks out and embraces people who worked here before. He welcomes everyone, â€she said.

Frank Tigue, also a parishioner for over 40 years, said he wanted the parish to remain open. â€œIt’s a stabilizing factor in a changing neighborhood, and it’s heartwarming,â€ he said.

The diversity of youth and experience with a mix of ethnic cultures among the nearly 1,200 registered parish members was evident in the installation mass last Sunday.

Spanish alternated with English for all prayers, scripture readings, remarks and even Bishop Fitzgerald’s homily. General intercessions were offered in English, Spanish, Vietnamese, French and qeq’vhi, the language of the indigenous Mayans of Guatemala who reside in the parish.

The Mass, which Father Ravert described as a â€œcelebration of what the community has accomplished with the grace of God over the past yearâ€, celebrated what he called the â€œflourishing renewal of the parishâ€.

The Spanish and English choirs sang beautiful sacred music leading over 200 people during mass which included an emotional moment where Father Ravert, greeting the representatives of the parish, tearfully and tenderly embraced the retired permanent deacon Jose Mendez , loved by parishioners for his 32 years of service to St Ambroise.

After Mass, Father Ravert thanked many people, including his mother Eleanor, whom he called â€œmy first friend and my best friendâ€, and without whom â€œI would never know the love of Godâ€.

Although he often drove from his first priestly mission to St. Charles Borromeo Parish in Bensalem on Roosevelt Boulevard past St. Ambrose on his way to his family home in Manayunk, he was happy to make the parish his new home. .

He thanked the parishioners – even speaking in Vietnamese, with nods of approval from some of the faithful – for their “generous spirit and loving support which strengthens my spirit every week.” Thank you for being part of your family here in Saint-Ambroise, â€said Father Ravert. â€œI can’t wait to see what God has in store for us in the years to come. “

The invention of multilingualism looks to the future