Irving’s lawyer fled the Ukrainian capital during the Russian invasion. Now he says he has no intention of leaving

Classes are stopped. We are at war.

Tom Sanchez woke up with these words last Thursday in the Ukrainian capital when Russia invaded its western neighbor.

Since late January, Irving’s lawyer had been in Ukraine studying Russian at the NovaMova International Language School in Kiev, where he had for several years to learn the language.

With Ukraine now defending itself from the second most powerful army in the world, Sanchez says he has no intention of leaving.

“Everyone in Kiev knew [Russian President Vladimir] Putin was going to attack,” he said, speaking on the phone to The Dallas Morning News Monday from his hotel room in Lviv, about 330 miles west of the Ukrainian capital.

After the invasion, Sanchez and his classmates tried to figure out what to do.

On previous trips, class sizes were larger, usually with students from other countries trying to earn college credit. This time, however, the classes were smaller.

Sanchez, who is 69, is an intellectual property lawyer, according to his LinkedIn page. A partner at Kelly & Krause of Dallas, Sanchez has lived in North Texas for about 20 years.

He said he served in the United States Marine Corps in the 1970s as a radio operator and knows what it feels like to drop a bomb, even from a distance. He recalled how the ground shook in Kyiv late last week.

“When something big hits, even if it’s 8km away, you’ll feel the ground moving,” he said. “The sound comes after.”

Sanchez took a train to Lviv on Friday evening, a journey which under normal circumstances takes about eight hours. It turned into a 17 hour trip.

“Two of the big men who were waiting with their wives took them away and everyone cheered,” Sanchez said of those try to sneak.

When the men were finally allowed to board the trains, they were crammed into the carriages. Many of them stood for most of the ride, he said. People started offering seats to others so they could sit for about an hour before offering it to someone else, he said. 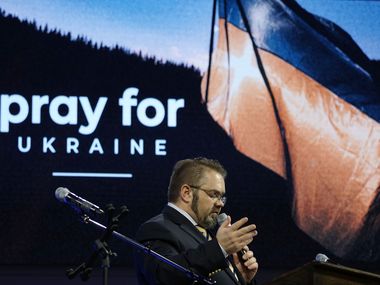 What made the ride even more miserable was how hot it was inside the crowded trains. Sanchez said temperatures reached over 84 degrees.

“It was very hot on that train,” he said.

Adding to the misery, Sanchez said, is that the train stopped several times. He thinks there was an effort to avoid areas where conflicts were occurring.

“The driver was quietly walking by and saying to everyone, ‘Put on your warm clothes, I’ll drive you to this side or this side of the train. Stay quiet,” Sanchez recalled.

“You could hear the shootings going on outside. It’s a wonder those train conductors allowed us to continue.

Sanchez is now in a hotel in Lviv, about 80 km from the Polish border. He said he recently received a call from a friend asking for help getting a young family member out of the country. He has since learned that they were unable to leave Kiev.

About 350,000 Ukrainian refugees, mostly women and children, have fled to Poland, Ukraine’s western neighbor, according to media reports. Thousands are still waiting to enter the country, along with others including Romania and Hungary.

“All these people waiting in 10-mile queues to get into Poland, I don’t know how they survived the snow and the cold,” Sanchez said.

Where to donate to help Ukrainians

More than 500,000 refugees have now fled Ukraine as the war against Russia escalates. That number could climb to 4 million, according to a spokeswoman for the UN refugee agency. Many in the United States want to help but are reluctant to send money to a country at war. Here is a list of established groups helping in Ukraine or neighboring countries currently hosting refugees.

He said the city so far is immune to military conflict, but described the mood as “stoic”. He said some restaurateurs were closing their stores early so people could sleep on the floor.

After 10 p.m., no one is allowed out, Sanchez said, and hotel guests practice bomb drills every night.

Although Sanchez planned to leave on February 20, he said he would stay from now on. When asked why, his response is simple: “I think the two kids in my class said it best: ‘If I’m here, my family will care; my country will care. Good enough for a 23 year old couple.

Sanchez said Russia’s invasion is not just a problem for Ukraine – something he said Ukrainians were aware of in the weeks leading up to the attack, and since 2014. He praised the leadership of Ukrainian President Volodymyr Zelensky, describing it as “almost biblical”.

The current war is Putin’s push for world power, Sanchez said, and he doesn’t think Putin will stop with Ukraine if he succeeds.

As of now, Sanchez said, he hasn’t decided when he will return home.

“You should ask the guy in Moscow,” he said, referring to Putin. “You have to ask him what his plans are, and I’ll tell you what my plans are.”

Prabhas-Kriti Sanon star “Adipurush” to be released on January 12, 2023

This anger tool can soothe your child during a tantrum