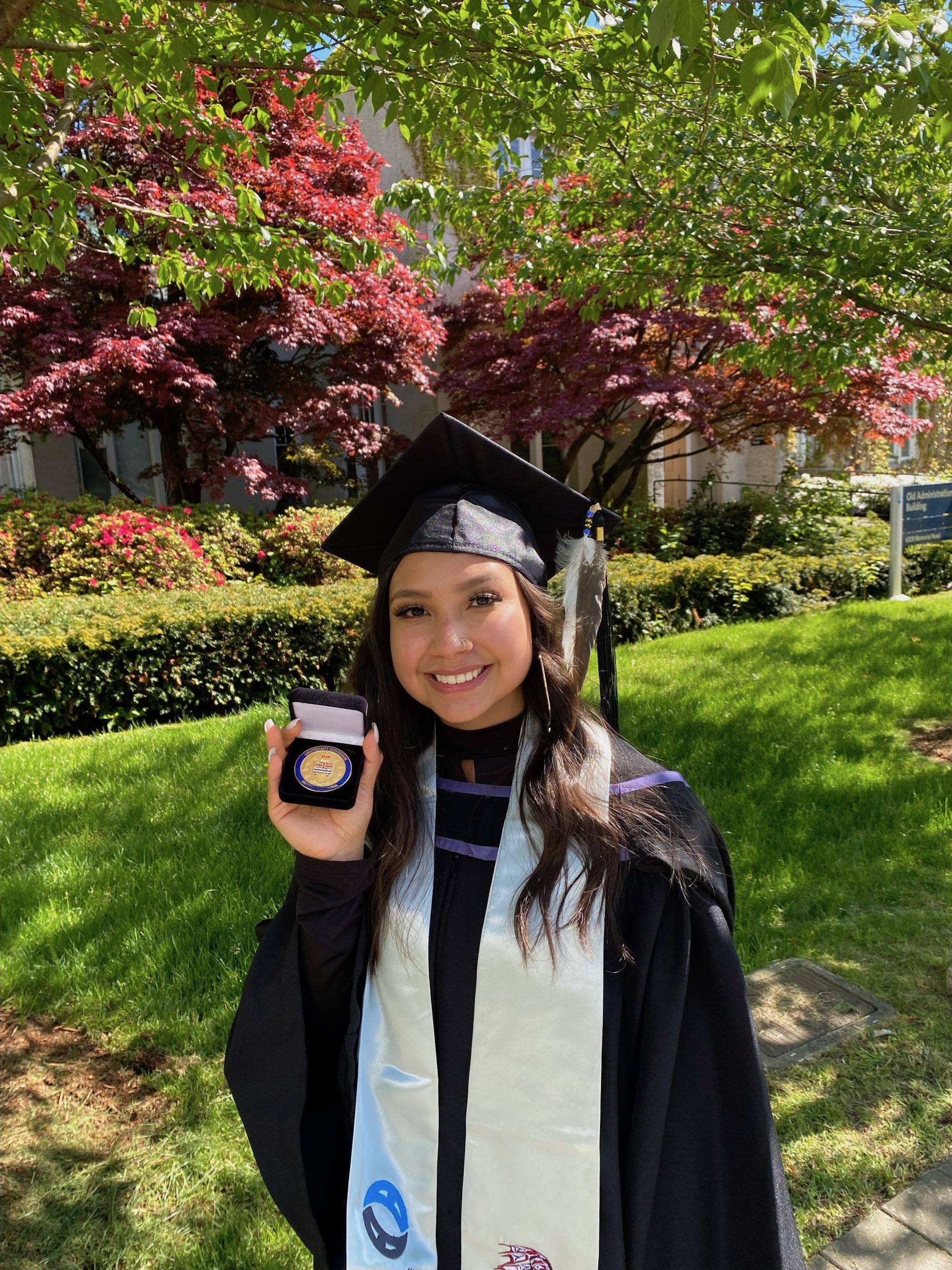 By Chadd Cawson
Journalist of the Local Journalism Initiative

Graduation day is an exciting and special day for all students as they see all their hard work pay off. It was a bit more special for University of British Columbia (UBC) graduate Ktunaxa student Aiyana Twigg of the Tobacco Plains Nation as she received the 2022 Lieutenant Governor’s Medal for Inclusion, Democracy and Reconciliation at his May 25 graduation ceremony.

Twigg is a graduate of the four-year First Nations Languages ​​and Anthropology program. His decision to take this undergraduate program stems from his commitment to his community and his desire to see the revitalization of the language within it. Twigg loved having the opportunity to research and learn her own beautiful language, creating resources for her community.

“Our Ktunaxa language is critically endangered, there are actually only 20 fluent speakers left,” says Twigg. “It is very important that this work be done. I really wanted to support my community by acquiring knowledge and skills to really support them in this language revitalization. »

Twigg is no stranger to offering support. When the pandemic started in 2020, most of us were focused on self-isolation as she focused on bringing people together, especially the young people in her community.

“I had the privilege of growing up on a reserve and learning from Elders and community members. I was able to learn our languages ​​and our cultural practices,” says Twigg. She soon learned that not everyone in the community knew these things. She started the @KtunaxaPride account to bring together those who felt disconnected from each other.

“I wanted to make this knowledge available and accessible to them. I decided to use Instagram to reach out more to young people in my community,” says Twigg. “It then suddenly moved to this platform, not only for Ktunaxa youth, but also for other indigenous people from different backgrounds. It has also become a place where non-Indigenous people can learn more about Indigenous communities and where non-Ktunaxa living in our territories can learn more about us.

@KtunaxaPride has become a source of inspiration for other indigenous people from other backgrounds to proudly explore their own history and discover their own cultural knowledge. “It has now encouraged all these other groups of people to start learning about their own culture, which was really heartwarming and something unexpected for me.”

Last month, Twigg spoke eloquently and from the heart as a young guest speaker at the Bringing Home the Salmon virtual festival which examines ways to bring salmon home to the upper Columbia River. “I was really happy to be part of it and also to have the opportunity to learn from others who were working on this initiative and to learn more about this salmon culture that I didn’t know much about”, said Twigg.

With Twigg giving so much to the community, it is very well deserved and fitting to see him return with the award of the 2022 Lieutenant Governor’s Medal. people in his community are working hard to revitalize and reconcile.

“It’s a commemoration of the hard work that I do to break down these colonial barriers that were put in place for me to not really succeed and actually overcome them. It’s a representation that we as Indigenous , we’re still here,” Twigg says. “My grandparents and dad went to boarding schools and that was my motivation to do language revitalization, because they weren’t allowed to speak the languages. .Winning this award warms my heart and recognizes that we are still here and we are not going anywhere.I do not consider myself to be the winner of this award but my entire community who have supported me and pushed me to be where I am today.

Twigg celebrates all the hard work the Ktunaxa First Nation is doing to be where they are today.

She thinks it is important to continue to push, teach and practice traditional practices and her language and this is her plan after graduation as she takes a year off to work in her community. She has been accepted for an immersion program with the First Peoples Cultural Council where she will work one-on-one with an elder in her community to learn the Ktunaxa language, completing 300 hours of language learning and working on developing a program with other members of his community. As part of Twigg’s undergraduate cycle, she will continue her research into the Ktunaxa writing system.

“The goal is to publish a journal article with my professor about our findings and next steps,” says Twigg. “The main goal of this research is to really identify and assess the potential shortcomings that exist in the writing system, and then do something about them.” Other plans for this future leader include Twigg’s plan to pursue his master’s degree in linguistics with a focus on language revitalization.