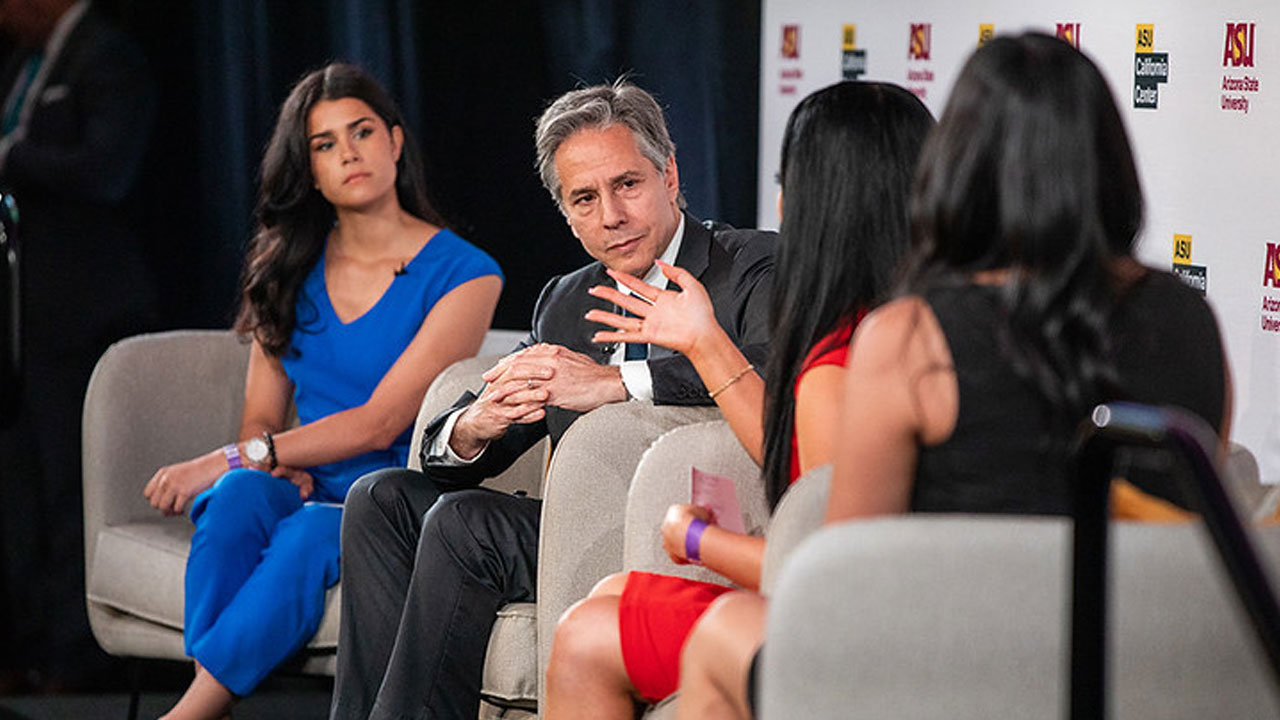 Journalists and civil society leaders from across the Americas gathered at the ASU California Center in the historic Los Angeles Herald Examiner building on June 7 to participate in the first-ever Media Summit of the Americas, a multilingual conference designed to respond to a growing information crisis in the hemisphere.

The event, which was part of the larger Ninth Summit of the Americas, was organized by the Walter Cronkite School of Journalism and Mass Communication at Arizona State University; the US State Department; and Equis Institutea hub for Latin American community leaders working to increase civic participation in American democracy.

From the growing threat of misinformation, censorship and mistrust to the importance of protecting press freedom and promoting media literacy, media professionals and speakers from Latin America and the United States United, including US Secretary of State Antony J. Blinkenspoke at the Media Summit to share their own experiences in addressing these issues.

Andrés Martínez, professor of practice at the Cronkite School and columnist for Mexico City’s Reforma newspaper, attended the platform’s accountability workshop, which highlighted the factors that make misinformation problematic in communities predominantly Latino and Spanish in the United States, including information voids and the changing nature of Latino media consumption.

Martínez, who has called disinformation a “cancer” that affects everyone, believes that to identify solutions and disrupt the information crisis, media professionals and civil society leaders must join forces.

Collaborative efforts, like the Media Summit event, are a step in the right direction, Martínez said.

“Often we don’t connect and collaborate enough across borders. The Cronkite School wants to create dialogue in the hemisphere so that we can work together to spread disinformation and strengthen journalism.

Almagro, who spoke about the role and responsibility of governments in supporting media integrity at the Media Summit, took the floor to announce the launch of the Center for Media Integrity of the Americas, a new center funded by voluntary donations to promote and support the practice of independent and unaffiliated journalism and social media production in the Americas.

“It is essential for the sustainability of any democracy that citizens have relevant and factual information to make the best possible decisions. This right is being openly challenged by malicious stakeholders who misuse the multiple communication technologies available to us these days to spread disinformation and misinformation that promote their agendas at all costs,” Almagro said.

“Today, we are launching this Center for Media Integrity of the Americas to support the right to information of these citizens and invite all potential partners across the Americas to join us in this endeavor.”

And that wasn’t the only announcement attendees heard at the Media Summit.

During his remarks, Secretary Blinken announced the launch of a new chapter of the Disinformation Communications Network (DCN), which will benefit journalists in the Americas by expanding their resources and connections.

“DCN’s strength lies in the diversity and flatness of the network that has been created. It doesn’t try to prescribe a one-size-fits-all solution, but what it does do is make it easier for attendees to learn from others’ answers – whether through webinars or trainings, online learning centers or research exchanges, even games and apps,” Blinken said. .

“The new Americas chapter will complement the DCN hubs in Africa and Europe, further expanding our network of partners and the insights they bring,” he said.

“It’s going to take a long time and you have to start with education. It has to start with media literacy,” Baietto said of media sustainability.

“Having the proper literacy to try to separate information from misinformation, right from wrong, is something that has to start very, very early,” Blinken said.

And although Blinken thinks being a journalist is a challenge, he found it extremely important.

“It’s incredibly difficult, but it’s incredibly, incredibly powerful and incredibly necessary. And I think having this willingness to try to learn something, to understand it, to know it, and then to be able to communicate it to your fellow citizens is a wonderful thing, so it’s great to see you all participating.

Blinken’s discussion with early career journalists and all the other conversations and workshops that took place during the Media Summit epitomize the #CronkiteGlobal mission to connect media professionals across the globe.

You can see photos from the event here.

About Cronkite School
Arizona State University’s Walter Cronkite School of Journalism and Mass Communication is widely recognized as one of the nation’s top professional journalism programs and has received international acclaim for its innovative use of the “university hospital” model. Rooted in the centuries-old values ​​that characterize its namesake – precision, accountability, objectivity, integrity – the school fosters journalistic excellence and ethics both in the classroom and in its 13 professional programs that fully immerse students in the practice of journalism. journalism and related fields. Arizona PBS, one of the nation’s largest public television stations, is part of Cronkite, making it the largest journalism school-run outlet in the world. Learn more at cronkite.asu.edu.

Close to retirement? Here’s how to get rid of your debt before you leave work.