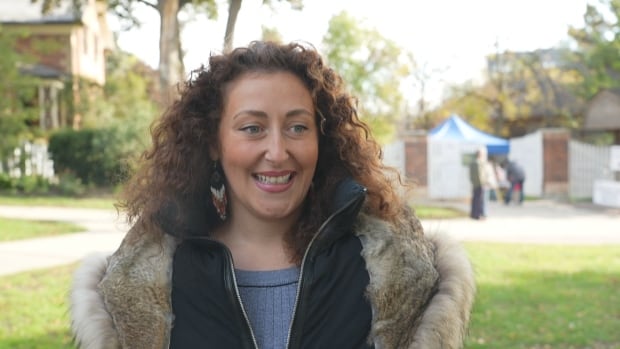 On a cold, cloudy day at Riverdale Farm, several families are participating in an effort to revitalize languages ​​that have long been in danger of extinction.

Lindsay Hachey places the notepads on a table with words written in Ojibway and Mohawk for teachers to hand out. They will help parents and children learn to describe the objects and animals they will see on the tour, which is the first language walk of its kind for the Native Canadian Center in Toronto.

Hachey, the manager of the EarlyON Indigenous Language and Family program, says activities like this can help families learn the languages ​​of their ancestors together.

“What we found was that there was such a gap between the generations who did not know their language,” she said in a telephone interview with CBC Toronto. Hachey says that’s why it’s important for parents to learn with children.

She says that in order for Indigenous families to reclaim their culture, it is important to start by learning their languages.

“The language has always been based on knowledge of the land,” she said. “I always like to say that there are special codes in the language that activate its DNA by reclaiming and remembering who they are.”

WATCH | This program helps parents and children learn Mohawk and Ojibway together:

For a group of language learners with the EarlyON Native and Family Language Program, a walk through Riverdale Farm provides hands-on education. During the program’s first language walk on the farm, parents and their children had the chance to practice Mohawk and Ojibway side by side while being in nature. This is the seventh installment in a CBC Toronto series called Rediscovering Culture, which examines how residents of the GTA are reconnecting, rediscovering and reclaiming their cultural roots. 2:57

Dr. How Hoong Au was born in Malaysia to parents from mainland China. His family thought it would be better for him to learn English than Mandarin or Cantonese.

This left Au without much knowledge of any Chinese language. He knew familiar Cantonese well enough to converse, but he could neither read nor write it.

At 75, Au now attends Toronto Mandarin School alongside his grandchildren, who know the language quite well. He is learning to speak, read and write.

Au said that knowing another language should be seen as a gift and the learning process has been a very rewarding experience. He says those who plan to learn languages ​​from their cultural roots should do so.

“You should be thinking [of it] as an opportunity to open your mind and come back to your roots where you can live up to the spirit of your generation and your ancestors. ”

Being half Japanese and half white, Marla Kishimoto has always been fascinated by Japanese culture, but she never really tried to find out more about her roots.

Everything changed during a trip to Japan in 2018.

“When I came back I decided that the next time I went I wanted to be able to communicate,” said Kishimoto, 35, who lives in Toronto. “I signed up for real classes and really started to seriously try to learn the language.

She says much of what she knew about her family history centered on the time her grandparents spent in internment camps during World War II and their eventual move to Toronto. But little by little, she learns more about the details of this time. She has now recovered the files of property that were taken from her grandfather when he was interned by the Canadian government.

Kishimoto says she felt it was important to learn more about her roots and language, because after the war many Japanese tried to downplay their heritage.

“They were kind of encouraged to mingle outside of the community,” she said.

“My father and his siblings married very white people… And I think a lot of that culture was lost just because it wasn’t really something the rest of the country viewed positively,” he said. she added.

“Having lost the language and all the little cultural bits and pieces, I feel like now is the time to reconnect with those, now that we can.”

Kishimoto started taking classes at the Japan Foundation in 2018 and continued for two years. She has since started practicing the language with Japanese friends and is planning a trip to Japan for the next year.

She says that while there are many ways to reconnect with the culture, language was the right gateway for her, especially when it comes to traveling to Japan.

“So much history [is] so ingrained in the language that I think learning the language really opens up a lot more avenues. “

If you have a story to share about how you rediscover your culture, contact us through this link or email us at [email protected]