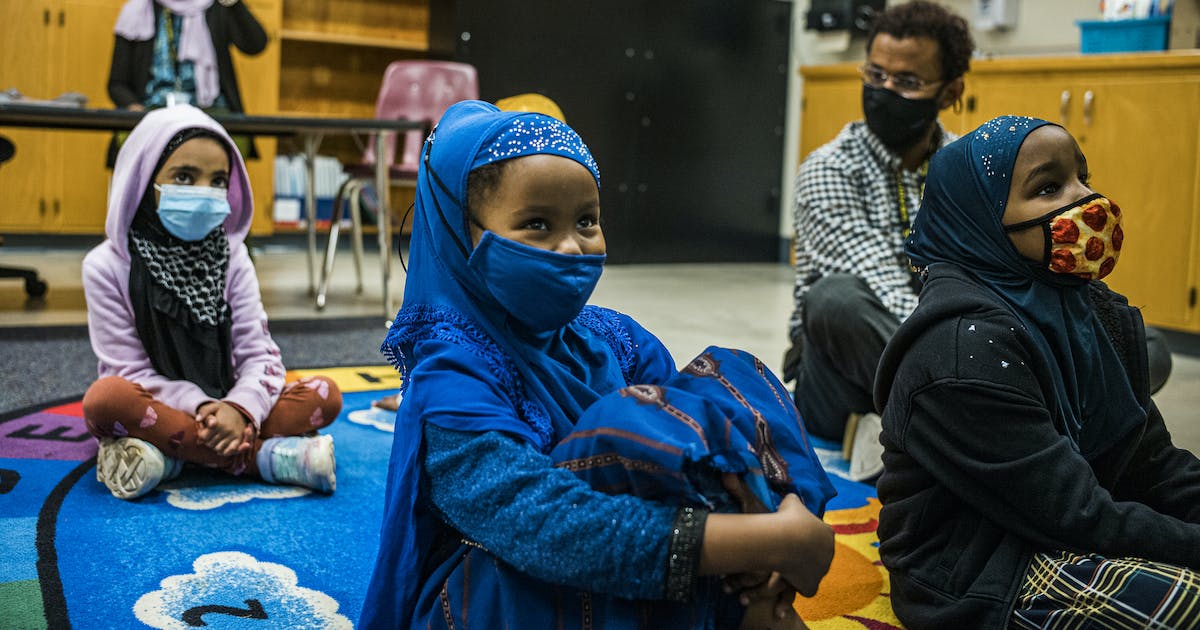 For weeks now, Sakarie Hassan has returned from kindergarten to Sullivan STEAM Magnet School, eager to speak the words he is learning to read in Somali, the language he speaks at home. He will greet them with a “see tahay” (how are you?).

“He likes to show himself to members of his family,” his mother Nimo Mohamed said through an interpreter. “As a mom, I am so grateful that he is learning his native language at school.”

Hassan is one of some 100 students in Minneapolis Public School’s new Somali Heritage Language Program, launched this year for K-2 grades at Sullivan and Lyndale Community School – two schools with a high concentration of 2,900 Somali students of the district. While not a full immersion model offering all-day instruction in Somali, the elective class focuses on teaching students to read and write in the language.

The program is in part inspired by a similar effort for Hmong language students, which began in the district in 2004. Hmong students can begin a bilingual course at Hmong International Academy and continue to learn the language and culture. up to high school. Paid from the District General Fund, the Hmong and Somali programs are aimed at native speakers and designed to help prevent young students from losing their native language.

â€œThere was a real need for this,â€ said Muhidin Warfa, executive director of the district’s multilingual department. â€œFamilies were starting to feel disconnected from their own children, especially those born here. As the students were immersed in English, they were no longer able to communicate with their own families or communities.

A handful of other districts in the state offer Somali and Hmong classes for second-generation students. Last year St. Cloud Schools launched a Somali class for native speaker high school students and recently extended this because of the high demand. Warfa has also received requests from several other public and charter schools – both in Minnesota and across the country – interested in starting their own such programs.

“We are seeing more and more interest in these kinds of language heritage programs,” said Ayumi Stockman, world language education specialist at the Minnesota Department of Education.

The programs have a double benefit, Stockman said. Research has shown that students who develop and learn the structure of their mother tongue are more successful in learning a second language.

â€œIt’s also just an assertion of the identity of the students,â€ Stockman said. â€œLanguage and identity are really linked. These programs provide the space for this affirmation.

One recent morning, four Somali preschoolers sat cross-legged on the floor in Anwar Mohamed’s classroom in Sullivan. After a quick review of the classroom rules, he began a lesson on the Somali alphabet. During the half-hour lesson, Mr. Anwar spoke Somali. Students sometimes slipped into English, but enthusiastically repeated letters and completed worksheets in Somali.

Mr. Anwar works with the students’ other teachers to make sure his lessons match the literacy goals that the rest of the class is focused on.

â€œWe make sure we meet these learning goals,â€ he said. “It helps them develop those reading skills to be bilingual, which we know helps them academically and throughout their lives.”

This classroom instruction is crucial to understanding a language, said Hibo Nuur, whose daughter is a kindergarten student in Sullivan’s Somali program. Although she knows her daughter can speak Somali now, she wants her to learn more from people outside her family.

â€œWe have to continue to know who we are while learning English and American culture,â€ Nuur said. “We don’t want to lose our language, our culture or our dignity from generation to generation.”

Gao Xiong, director of the International Hmong Academy, said the school’s Hmong curriculum offers a way to help preserve the language and encourage students to be proud of their culture. Despite its name, the academy is a community school open to all students. About 100 native speakers are enrolled in the Hmong language program.

â€œFor me, it’s about giving them that inclusive space so that they aren’t embarrassed, but rather proud, to be Hmong,â€ Xiong said.

The Hmong language did not have a written form until the mid-20th century, which makes it all the more important for programs that encourage young people to continue practicing and preserving the language, said Jerry Toojntxawg Lee, father of eight children. His youngest is in his first year at the International Hmong Academy and he hopes his classes will help him maintain his “Hmong language,” he said. Some of his older children speak mainly English, even when they are at home, he said.

â€œHaving this offer gives the first generation a home and support for this younger generation that is kind of stuck in the middle of two cultures,â€ Lee said. “Having that connection to their roots is important … and it can be difficult for parents to teach all of this at home.”

Mariam Adam, the main ESL teacher in Sullivan, said parents in the community have been pushing for a Somali-born language program for several years. Although the program is currently only available to the youngest students in the school, the district plans to offer more grade levels each year so that students can continue their Somali education as they grow older.

â€œThis is just the start,â€ said Adam. “But we are blessed that the district listened and recognized this as a need.”