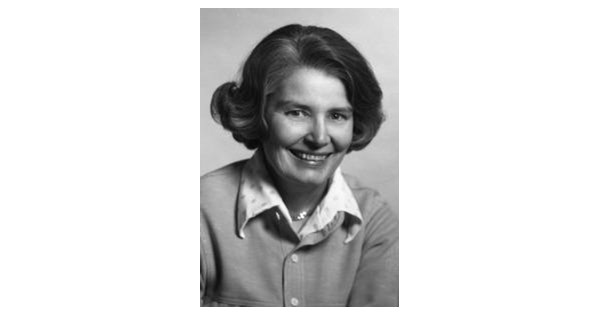 Ruth Bradley Holmes, author, linguist and mother of seven, passed away peacefully in Bartlesville, Oklahoma on September 2, 2021, surrounded by her loving family. She was 96 years old.

Edith Frances Ruth Bradley was born in Beijing, China on November 26, 1924 to Edith Louise Grierson Bradley and Hugh Wise Bradley, the Chinese Maritime Customs Commissioner. She spent her childhood in China, but moved to California in 1938. Ms. Holmes attended Dominican convent school before earning a bachelor’s degree in Slavic languages â€‹â€‹from the University of California at Berkeley. She was fluent in Russian, Portuguese and French and was proficient in German, Greek, Latin and Spanish.

Her language skills enabled her to work as a Russian translator at the first United Nations conference in San Francisco in April 1945. She continued to use her language skills throughout her life, teaching Russian at Louisiana State University ( LSU) and later teaching Russian for adults. courses and working as a translator for TRW-Reda Pump and other delegations visiting Phillips Petroleum in Bartlesville.

Always curious, she continued to further her education by studying English Literature at LSU in 1947 and later attending the Middlebury Language Institute in Vermont for an intensive study program of the economic geography of Russia taught exclusively in Russian. in 1971, and a summer program at the University of Oxford to study 17th century philosophy in 1976.

During World War II, along with her mother, she volunteered at a hospital in Santa Cruz, California. One day his mother spotted a handsome male patient, Clifford Holmes, who had been admitted with a serious leg injury and suggested that Ruth go visit him because he was reading esoteric philosophy; he clearly needed to cheer up. This meeting turned into a court and eventual marriage in Santa Cruz in 1945. Living in several places in their early marriage, the Holmes family eventually settled in Bartlesville when Cliff was transferred from Salt Lake City, Utah, to by Phillips Petroleum Company at their headquarters in 1959.

As a mother of seven, Mrs Holmes has been active in various education and youth organizations, including as President of the Parent Teacher Association, Troop Leader for the Scouts and Girl Scouts, Director of the Council of administration of the YMCA, and as a member of the board of directors of the YWCA which founded the Youth Employment Service (YES) which later became a state program.

Beyond her family interests, she was also a member of a number of civic, writing and women’s organizations including the American Association of University Women, Thoda Study Club, Kappa Alpha Theta Alumnus Club, the Bartlesville Library Board, the Tuesday Club, and the Bartlesville Writers Club. .

Beginning in the late 1960s, Ms. Holmes developed an interest in Native American languages, particularly Cherokee, and worked with native speaker, Betty Smith, to write the very first language teaching text, “Beginning Cherokee “in 1976. A second edition was released in 1976. 1978, scheduled to coincide with an audio version produced by the two women. Ms. Holmes continued her linguistic work and created a transliteration in 2004, “The Four Gospels and Selected Psalms in Cherokee: A Companion of the New Testament Syllabary.”

She presented her work at several language conferences, particularly on what she saw as the links between Cherokee and other languages â€‹â€‹around the world. These included an invitation to present at the Eleventh International Congress of Anthropological and Ethnological Sciences in Canada. She remained a member of the Linguistic Society of America and the American Anthropological Association.

Ms Holmes has also been politically active, as president of the Washington County Democratic Women’s Club and as the Washington County campaign manager for the Governor, later US Senator David Boren. Governor Boren later appointed Ms. Holmes to the Board of Regents of Oklahoma Colleges where she served from 1976 to 1985 and chaired from 1981 to 1982.

Other awards include a Cherokee Nation Book Award in 1977, the Central State University Distinguished Service Award in their Scholars Series, the Southwestern Poetry Award, the Gemstone Poetry Award, and the local Allied and Humanitarian Arts Prize for Literature.

Mrs Holmes, like her husband, believed that her greatest achievement was her family and was always proud of her seven children, fourteen grandchildren, five great-grandchildren and three more on the way. A devoted matriarch, she was a peerless role model and treated everyone with generosity and respect as the glue that binds the family together. She will be sadly missed by all.

The family would like to sincerely thank Dr. Donald Simmons and the staff at Kindful Hospice for their loving support. A memorial service will be held at the Redeemer Lutheran Church in Bartlesville at 11:00 a.m. on Saturday September 11. In lieu of flowers, please send donations to the National Pancreas Foundation.