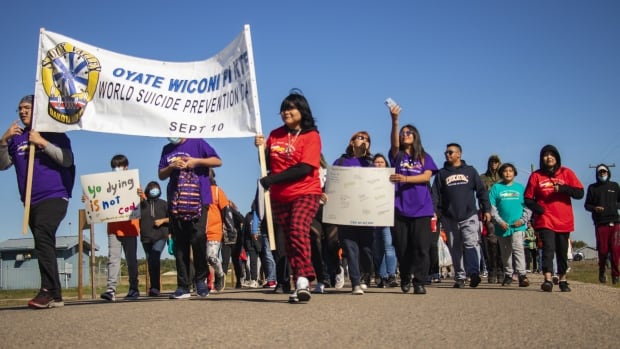 Each step taken Friday by a group of students from the Sioux Valley Dakota Nation marked a commitment to strengthening Dakota culture, language and identity as a form of healing.

The students marched together in memory of those who committed suicide ahead of World Suicide Prevention Day on Saturday.

“My heart was a little heavier than usual, like I could feel people’s sadness,” said Chloe Blacksmith, a 12th grader.

On Friday, dozens of students in grades 7 through 12 participated in the Oyate Wiconi Pi Kte World Suicide Prevention Day walk through the heart of Sioux Valley, a First Nation about 260 kilometers west of Winnipeg.

A study published in 2019 by Statistics Canada found that First Nations people in Canada had a suicide rate three times higher than the rate among non-Indigenous people. Suicide rates were highest among people aged 15 to 24.

Blacksmith said she hopes people who have joined the march have left knowing they are not alone. She encouraged anyone with mental health issues to seek help and to remember that they are important and wanted in the community.

“I see…a lot of future assistants. I see it already, with a lot of us [who] would like to try to make a difference in our community, especially with the younger generations to come,” said Blacksmith.

“I feel quite empowered, I would say, seeing everyone here eager to learn their language… [and] learn more about ourselves, our people.”

Joyce Taylor is the senior at Sioux Valley High School.

“We have all been touched in one way or another by suicide,” she said. “Over the past five to ten years, we’ve had quite a few suicides. … It seems like our community is still grieving.”

She hopes Friday’s walk will encourage people to find the strength to talk about mental health and help each other heal, and help prevent more lives from being lost.

“One suicide is too much,” she said.

Taylor said that when she was a child, deaths by suicide were rare in the community.

But social issues in Sioux Valley have been transformed by intergenerational trauma from residential schools, the Sixties Scoop and other colonial experiences, she said.

“Every day we face drug use, alcoholism, violence, things that were never ours,” Taylor said.

“It’s because of outside influences, European influences, and it just hasn’t happened in the last few decades. This stuff has been happening ever since Christopher Columbus got lost and landed on our shores. .”

But seeing young people united gives her hope for a healthier future because it shows the continued strengthening of Dakota culture and language, Taylor said.

No one is immune to the pain of intergenerational trauma, she said, but by standing together they can begin to heal.

Taylor is keen to tell students that it’s possible to break the cycle of trauma because Dakotas are “resilient and strong,” and those traits are enhanced by strengthening their language and culture, she said.

“You should be proud… We’re resilient. We’re still here,” Taylor said. “We are confident, we are strong…and we can survive anywhere.”

She hopes students will take this message to heart as future community leaders.

Shereen Ross, 15, a Grade 10 student, said Friday’s march was a moving experience as members of her family have died by suicide.

They appreciate the push to heal the community by strengthening the language and culture.

“I really want to learn my language and… learn all about the culture,” Ross said.

Grade 9-12 teacher Suelee Innes said students are encouraged to attend the march to ensure they know help is available if they are going through difficult times.

In many cases, students have lost family members and friends to suicide, she said, and they might not even understand what happened to them. That’s why it’s important to make sure they know they can get help talking about these experiences.

The other purpose of the walk was to train them as future community leaders, Innes said.

“Children are the future,” she said. “We’re trying to educate these young people so they can be successful in life, and part of that is also working with their mental and emotional health.”

If you or someone you know is having trouble, here’s where to get help: