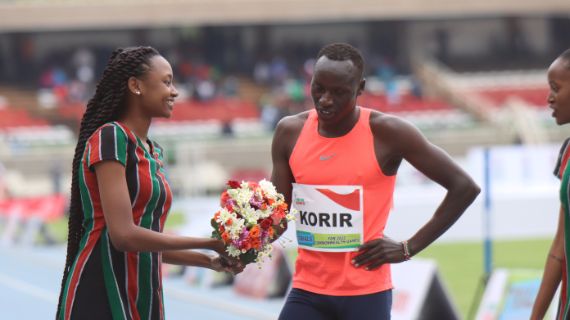 The 2015 Boston Marathon is coming to an end, Caroline Cherotich, Mare Dibaba and Buzunesh Deba are running towards the finish line and each of them can win, then after the last corner Mare is moving slowly, Deba is falling behind and now c It’s a race between Caroline and Mare, almost close to the last fifty meters, Cherotich suddenly displays a burst of energy, it’s unbelievable that she has just run 42 km but with the ultimate prize looming and the story behind waiting for her, nothing can stop her, she is now moving forward and crossing the finish line, this is another victory for a Kenyan athlete in a major marathon and the world joins her in celebrating the victory.

Then comes the moment that many are waiting for; a chance to speak to the world and frame their victory in a way only champions can. The interviewer asks her questions and the 2015 Boston Women’s Marathon champion struggles to come up with relevant answers. To be fair to her, she does a much better job than her compatriots who won major races in the months leading up to her victory, but one key aspect that came out in the interview was her inability to answer questions and frame its content within the objective of its current triumph.

Over the past four decades, the ability to communicate effectively has challenged thousands of elite Kenyan athletes and robbed them of the many opportunities that sporting stardom affords others, especially their hemispheric competitors. western. Some of these opportunities come in the form of corporate sponsorships, paid sponsorships to serve as spokespersons for various global causes, and of course highly paid speaking engagements. Considering that Kenyan athletes will continue to dominate the tracks, this current state of affairs must change; it is essential that the communication skills of our athletes are beyond reproach.

In order to understand the reasons for the current state of affairs and come up with helpful interventions, let’s take a trip to the birthplace of running in Kenya. Athletics is synonymous with the North Rift region. In fact, it is estimated that there are fifteen thousand athletes in the North Rift and that 75% of Kenya’s sports income comes from this region. In 2012, eighteen of the top fifty earning men in the world and eleven of the top fifty women hailed from the North Rift. (These are earnings calculated at over $500,000 over an athlete’s competitive lifetime) On top of that in 2012 at the Olympics, North Rift athletes won five gold medals.

The great interest in athletics in the North Rift began when the IAAF liberalized its amateur rules in the mid-1970s and a few Kenyans started earning large sums of money in Europe, Asia and the United States. United. When the incomes started coming back to Kenya, it had a galvanizing effect on thousands of young men and women, who saw an opportunity to acquire unimaginable wealth and they started training with fierce dedication. Additionally, the availability of US college athletic scholarships and increased prize money and appearance fees have had the effect of boosting interest and participation throughout the Rift Valley. Young athletes left the North Rift region as young, inexperienced villagers and after a few races returned as millionaires.

The fact that so many of the young athletes who eventually became world champions had limited education and exposure prior to their rise to the world stage was a major contributing factor to their poor communication skills. Their sudden social and economic advancement did not correlate with the communication skills required at such high levels and this factor was mentioned as a major aspect ultimately limiting the growth of their personal brands. In the long term, this had a negative impact on their earning potential against their competitors from Western countries. Many sports analysts unanimously agree that if the communication skills of Kenyan athletes improved, the limits of their possibilities would be greatly expanded.

That is why I am proposing that in 2015 the national government, North Rift County governments and the Kenyan business sector take deliberate action to help Kenyan athletes develop their communication skills, it is simply in our national interest to do so. Here’s why!

Kenyan athletes have been our country’s best ambassadors; they are recognized as heroes in many world capitals where they have won many races. This positive representation of our athletes can be exploited by the government in two ways; the fame of the athletes can be leveraged to showcase Kenya’s tourism sector and secondly the government can help them to increase their income which will definitely have an impact on economic growth.

Kenya’s struggling tourism sector can benefit by ensuring that whenever athletes win, the resulting media interest is well managed and athletes can invoke strategic talking points aimed at highlighting key attractions and arouse the interest of potential tourists. For example, they can frame their victory talks in compelling narratives fusing their incredible life stories, with their journeys normally starting from the attractive highlands of Kenya’s Rift Valley to training camps in the North Rift and with proper training in communication even manage to connect Kenya’s global tourist attractions. This can extend to the many ceremonial speeches whose potential reach to a vast global audience in a coordinated and eloquent way can be far more impactful than the costly public relations and media publicity that the Department of Tourism organizes. every year.

Secondly, when it comes to athletes impacting Kenya’s economic growth, it is interesting to highlight that research has found a direct correlation with athletes’ overall brand value measured in paid mentions and their skills in communication. According to Track Profile, during the years 2005-2010, $46,000,000 or (Ksh 4,278,000,000) in total prize money per year was awarded and Kenyan athletes received no less than 25% of this total each year. This equates to around $11,500,000 or (Ksh 1,069,500,000) every year, and this does not even include appearance fees and endorsement deals which are normally kept confidential but in many cases have much higher value than the cash prize.

According to Road Race Management’s ranking and prize list, the 2010 prize money was $7,452,227 and Kenyan riders made up about 50% of the total prize money. These numbers also don’t include appearance fees and endorsement deals. To contextualize the effect these amounts have had in Kenya, we can look at the city of Eldoret, home to the North Rift. It has seen a real estate boom with growth rates of nearly 8%, double the national average and the ever-changing skyline shows athletes’ continued investment in the city’s commercial real estate. It seems that the contribution of athletes to the Kenyan economy cannot be ignored.

It is therefore evident that if we increase the brand value of our athletes by investing in improving their communication skills, the country will earn more dividends due to their increased income. But even as the government invests in communication skills training for athletes, the Ministry of Sports must also work on other aspects like negotiating tax exemptions on winning fees, appearance fees and endorsements with countries where athletes compete, as is already the case with stars like Usain. Bolt which only competes in countries like the UK when the government offers tax exemptions.

North Rift County governments must also consciously invest in the communication skills of young, aspiring athletes who practice and reside at the many training camps in the area. By improving the communication skills of young athletes before they are introduced to the world stage, county governments can be sure that their investment will pay dividends in the future. To realize this reality, county assemblies could pass legislation that allocates a training budget to athletes while they reside in training camps.

And finally, the corporate sector with companies in the financial sector, the Nairobi Stock Exchange, insurance, construction and luxury car retailers should all invest in training the communication skills of elite athletes. They are directly involved in financial management or athlete participation. They stand to gain when athletes are finally able to earn more money through their improved communication skills.

As a speech coach and communication consultant who has worked periodically with athletes, I recommend two ways to conduct communication skills training.

Training seminars or workshops could be integrated with other regular programs in residential camps for young aspiring athletes and for professional athletes, a month-long one-on-one vocal coaching program that will train them on aspects such as mastering interview techniques, good diction for English presentations, dealing with nervousness among other topics will suffice.

Even as we convey our congratulations and express our pride in our athletes who have dominated the 2022 International Marathon Circuit, it is clearly in our national interest to invest in the communication skills of our greatest ambassadors. It is now!