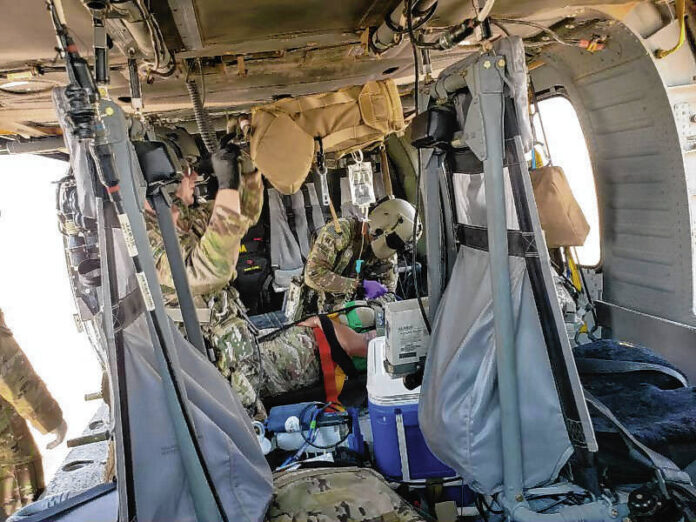 But it was not necessary. Stringer, a Greenfield resident and native of Greenwood, addressed the group in perfect Dari, a language spoken throughout Afghanistan.

He and his unique skills were part of the mission that treated thousands of evacuees at Indiana National Guard Camp Atterbury in September 2021 following the war in Afghanistan. It’s just one of the ways he used his language skills throughout his National Guard service, an experience that took him around the world in a variety of roles and shaped his outlook on life. ‘humanity.

The 40-year-old grew up in Greenwood and has lived in Greenfield with his family since 2013.

Stringer enlisted in the Indiana National Guard in 2000 while still in high school. As he pondered this decision, he called his cousin, a US Army recruiter, looking for a lawyer. His cousin gave him two pieces of advice. One was to never let your drill sergeant know your name during basic training. The other was to volunteer for everything.

“You’re going to end up doing things you don’t like, like cleaning bathrooms and scrubbing toilets,” Stringer recalled, having told her cousin. “But you’re also going to be able to do some cool stuff because you volunteered to do the uncool stuff.” I’ve done a lot of my career based on the fact that where there was a need, I volunteered to do it.

He had already had a passion for foreign languages ​​and cultures, having lived in Spain between his college and high school years. Stringer entered the Guard wanting to do something with languages, so he started in a military intelligence role that required him to be fluent in another language. He wanted to go to the Defense Language Institute to learn Arabic, but his fluency in Spanish already ticked a necessary box for his position in the Guard.

In 2004, however, while studying at Indiana University-Purdue University Indianapolis, Stringer and his Guard contemporaries received an email asking if any of them were interested in what would be the whole thing. first year-long Dari language course at the Defense Language Institute in Monterey, California. Stringer didn’t know what Dari was, but he knew he had always wanted to go to this school. He was single, could pick up and move easily, and a year in Monterey didn’t sound too bad either. He therefore answered in the affirmative.

“I never thought it would lead to all the other different opportunities that would open up after that,” Stringer said.

Learning a new language requires thinking creatively outside of the constructs of your own language, Stringer said.

“You have to be willing to break your rules to learn someone else’s,” he said.

“There’s a logic to the way languages ​​are structured,” he said. “One of the things I like about Persian is that everything has a root, a root idea or concept.”

By the time Stringer was studying Dari, the 9/11 attacks had taken place and the United States was at war in Afghanistan and Iraq.

He remembers being young and naive at the time as to where his service would take him.

“I’m in the Guard, aren’t I?” he remembered thinking. “I’m not going to be deployed. It’s one weekend a month and two weeks in the summer.

But he had been ordered to go to Afghanistan even before he finished language school. Two weeks after graduating, Stringer was in Kabul, going on a mission and talking with Afghans.

“Having this immersive experience, it really developed my fluency,” he said.

Stringer will return to Afghanistan twice throughout his National Guard service, and he will also serve in Kuwait. In 2018, he trained in Japan with members of the country’s ground defense forces.

Last year, Stringer was working for a program at Camp Atterbury as a military exercise observer and evaluator. He was preparing to quit full-time guard work and pursue a civilian career as a paramedic when he received a call that he was needed at camp. Stringer had an idea what it was all about, having followed what was happening in Afghanistan as the regime the United States had ousted from power 20 years earlier quickly recaptured the capital.

“I’ve dedicated over a decade of my life to understanding this conflict, so to see it all unfold is very shocking,” Stringer recalled.

He learned that he was the only Afghan linguist at Camp Atterbury.

Soon, he and his military colleagues were taking in Afghans fleeing their rapidly changing homeland.

Stringer flew back and forth between Indianapolis International Airport and Camp Atterbury for about five days. He estimates that several thousand Afghans arrived during this period. Stringer slept a little in his car between flights, which landed about every two hours. Speaking in Dari through intercoms for commercial aircraft passengers and through a megaphone for military aircraft passengers, he greeted guests in Indiana and explained what would happen next. The soldiers would help with their luggage and take them on buses, he told them, which would take them to Camp Atterbury, where they would have food, shelter, clothing and representatives to help them from the Departments of Defense and the state and the Red Cross.

“I understood that for Afghans to share their home is an honor, especially for someone in need,” Stringer said. “So I couldn’t be more proud to have the opportunity to share my home, and so that’s something I really wanted to make sure everyone who came in understood – I’m not happy that it happened. be produced, but anything I can do to make this experience better for you, I’ll make sure I try to, and we all are because that’s why we’re here.

Stringer recalled one cold, rainy night when the rear door of a military plane lowered, revealing the Afghans who were seated in seats but also on the ground close together. A passage from the poem accompanying the Statue of Liberty immediately came to mind.

“That American classic ‘Give me your…heaped masses (desire to breathe free),'” he said. “And I’m like, that’s exactly it. This is what we stand for as a community and as the American people at large. It was extremely moving for me to be there and see that.

He also recalled an Afghan from a flight that had recently landed on a Friday, the Muslim holy day, asking if they could pray as the sun rose before departing for Camp Atterbury. Stringer and his fellow Guard members were happy to wait, and he helped them figure out which way to face Mecca.

“You had a whole team of people who understood that this whole mission says everything about who we are as a people, from the little things like that to the bigger things of building that structure and making sure the medical care is there. , and making sure there’s an identified process to get people into the right communities,” Stringer said.

Stringer remembers helping one of the Afghan guests pick up the spilled contents of his opened suitcase. The luggage was filled with photographs.

“All that mattered most to them in the world was with them,” Stringer said. “They didn’t bring clothes, they brought pictures, because they can’t get them back.”

Later, he helped out at a clinic set up at Camp Atterbury, explaining to Afghan guests the vaccinations they would receive and information about medical checkups. Stringer, whose National Guard service had then trained him in his growing passion for health care, eventually took a civilian position at that clinic as a paramedic.

He is currently serving with C Company 2-238th General Support Aviation Battalion based in Gary, through which he maintains his capability as a helicopter medic. Stringer also works full-time as a community paramedic for a pilot program at Indiana University Health on the East Side of Indianapolis, visiting the homes of Medicare patients with reduced mobility for follow-up care appointments. primaries.

While serving in the clinic at Camp Atterbury, Afghan guests often asked him what the United States was like and where they should live. While Stringer knew many would likely end up in Afghan enclaves like Fremont, Calif. and Alexandria, Va., he touted Indiana whenever he could, including its job opportunities.

“There are so many questions and so much uncertainty on this road ahead of them, that I can only hope we added that level of normality while they were here in Indiana that helped them succeed. when they move to where they’re going to become Americans,” he said.

The pace of inflation is slowing but still hot