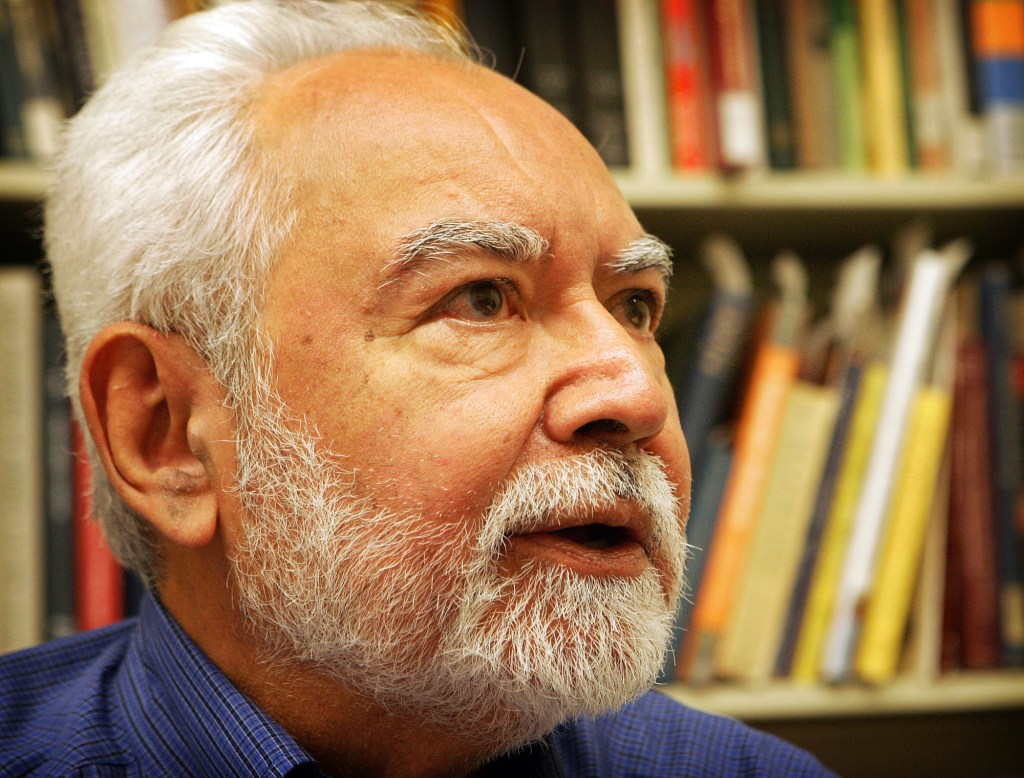 The summer sun shifts to fall. We are heading towards the moon as the wind brings chills to us. We rake the yellow leaves. We put on warmer clothes. We look back on the past year. Many are shivering at the losses the year has brought. If someone doesn’t shiver this year, a year, he / she unfortunately will. Death – the only thing certain as we spiral around this ring of death.

Eluid Martínez, Emeritus Professor of Creative Writing at UC Riverside, died this year at the age of 85. I didn’t know him, but I learned of his work from Inlandia, who released his collection of autobiographical short films, “Güero-Güero: The White Mexican and Other Published and Unpublished Stories,” in 2021. I wanted some know more about him so I looked for him, read his words; those black ink marks that we writers leave like fingerprints. I have learned.

Martínez was born in 1935 in Pflugerville, Texas, a town now known for its colossal water parks, but not then. The first of six children, Martínez grew up speaking Spanish. Martínez’s language was ridiculed when he entered American public school. He recounts his childhood experience in “Writer’s Perspective on Multiple Ancestries: Essays on Race and Ethnicity”: “American teachers washed children’s mouths because they spoke Spanish. The teachers had the children write on the blackboard fifty or a hundred times that they would not speak Spanish on the school premises.

Martínez would remember this harassment; however, he was not a man who could be shackled. He writes: “I only spoke Spanish when I started school in first grade. Other Mexican children already spoke English and Spanish, and I’m sure that helped me a lot. In my case one morning it seems I woke up and was able to talk [both] English and Spanish. I don’t remember learning English, but I do remember in the first grade at Bickler Elementary School, the teacher had us read Jack and Jill books and nursery rhymes aloud.

Spanish, however, has remained an integral part of his educational journey.

“My father, a man with a superb third grade education in a village school in Mexico, was my first great teacher. When I was eight, he started teaching me to read and write Spanish through the Spanish language newspaper La Prensa de San Antonio. He would bring me books in both [English and Spanish] languages. “

A talented artist, Martínez received a bachelor’s degree in pictorial art from the University of Texas at Austin and completed graduate studies in art at the Universidad Nacional Autónoma de México. However, he moved away from teaching art in academia in 1963 after a stint at the University of Illinois at Urbana-Champagne to explore the bohemian lifestyle in Chicago and New York. This path led him to love when he met Elisse Weintraub. They got married and moved to Ohio where Eluid earned a doctorate. in 1972. The newlyweds moved west when he accepted a chair of comparative literature and languages ​​at UC Riverside that same year.

He continued his art and writing for the rest of his career, but just as important to him, he had a lasting impact on the educational demands of UCR by introducing the first Multiethnic Literature course and courses on the identity and ancestry that have become requirements for graduation.

Martínez remained “fascinated by cemeteries and by the quiet, unrecorded life of ordinary people who are effectively circumscribed by dates of birth and death. What sorrows and tragedies have they known in their life, what joys and satisfactions?

Eluid Martínez, maintaining the wind that brings us cold as we twirl in its autumn spin. A time of year when many people create ofrendas for those who have spent that year, placing the Cempasúchil, calacas and calaveras on the altar with sorrow, with care.

Starting November 1, the eve of Dia de Los Muertos, the Inlandia Institute will honor the legacy of Eluid Martínez by accepting nominations for the Eliud Martínez Prize, a national competition whose eligibility is limited to writers who are identify as Hispanic, Latino / a / x and / or Chicana / o / x who have not yet published a first prose book.

Somewhere on the other side, Martinez raises a glass in the cool air and whispers to us: “Hablar!

Renee Gurley is a teacher, writer, activist, desert rat. She is currently Editor-in-Chief of the CMCC’s HOLW, Literary and Arts Journal.

Newberg school employee to work in blackface, is put on leave

LTE: Purandare for HT committee asks for your vote this fall

Alabama begins to remove racist language from its constitution