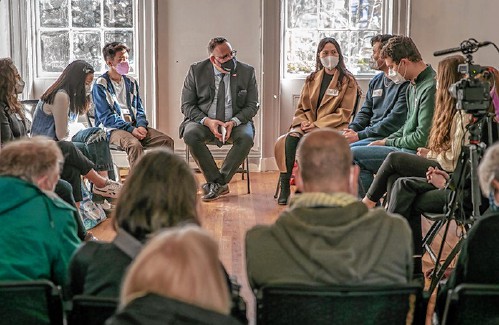 US Secretary of Education Miguel Cardona visits the Dickinson Museum

AMHERST — Friday, March 4, was a busy day for Miguel Cardona, U.S. Secretary of Education, who began with an early morning visit to Rafael Hernández K-8 Elementary School in Boston, Boston’s oldest bilingual community school of the city, where he spoke with students, teachers, parents and others about multilingual learning.

Next, it was at MIT Sloan School of Management for a lecture on the 50th anniversary of the passage of Title IX, the landmark legislation that dramatically expanded opportunities for girls to play school sports.

Cardona, a Connecticut native who became the nation’s 12th education secretary a year ago, then traveled to Amherst to get a taste of local literary history: he visited the Emily Dickinson Museum, then chatted with students from Amherst College studying Dickinson about what it was like to examine the famous poet’s work so closely.

“The deep knowledge I have of Dickinson is due to the last hours,” he said outside the museum after his visit. “I learned a lot today, especially about the value of being able to read and work with primary sources. I asked one of the students to read one of (Dickinson’s) poems in her room. was really special.

In fact, a key part of Cardona’s interest in visiting the site was to speak with students about their experience using the Dickinson Homestead for their studies. He said he was interested in examining the role non-traditional learning environments can play in expanding educational opportunities for students.

“When we think about reinventing education, it’s really important that we consider experiential education and how we can connect with museums and other primary sources of information,” he said. “Let’s see how (primary sources) can be brought into schools and how schools can access them.

“We learned during the pandemic that you don’t have to be in a traditional school,” Cardona added. “We have to accept this as we think about giving our students better opportunities to learn.”

Cardona said he was also intrigued by the connections within the Five College system, as well as the close relationship between Amherst College and the museum, which is owned by the school but operates independently.

After her tour — her first visit to the property — Cardona and students from a Dickinson seminar taught by Karen Sánchez-Eppler, a professor of American studies and English at Amherst, huddled together in a cold room in the Dickinson house. to discuss some of these issues. (The museum has been closed to the public in recent years due to the pandemic and extensive restoration work.)

“What does it mean to learn in this kind of environment? Cardona asked. “You are inside a place (of primary documents). How does it impact your learning when you are literally able to read a poem in the (Dickinson’s) bedroom? »

The students touched on a number of things – for example, how the intimacy of reading one of Dickinson’s handwritten manuscripts in one’s own home can give them a kind of emotional understanding of a poem or letter that doesn’t cannot necessarily be acquired by reading this poetry. in, say, a library carrel.

“It’s special to see and get a sense of where she wrote,” said Fiona Anstey, a sophomore who grew up in Japan. “You can look out the windows and see something from what she saw.”

“It makes you feel really connected to her and her writing,” added Christian Pattavina, also a sophomore.

Cardona also asked students about their experience with the Five College system; students responded that there were many resources available in the system, from books to a range of courses they could attend at different local campuses, which enriched their education and gave them a sense of direction in their own work.

Cardona, a native of Meriden, Connecticut, whose first language is Spanish, began his teaching career as an elementary school teacher and later became principal at the age of 27, overseeing a school where l Bilingual education was key. Her doctoral work examined the gaps between English language learners and their classmates. He later served as a school superintendent and teacher of education in Connecticut.

At the Dickinson House, he told the students he appreciated their comments. “My goal is to listen to you and bring back what you said to DC and see how we can find ways to bring this kind of learning model to other places.”

Before leaving, he added that visiting the Dickinson Museum was “a great way to kick off Women’s History Month and recognize the contributions…of Emily Dickinson, and how her poetry has been continued and preserved by the women who shared it (with the world). She transformed the genre – what a powerful testament.

Steve Pfarrer can be contacted at [email protected]

5 Ways to Create an Engaging Presentation in Microsoft PowerPoint