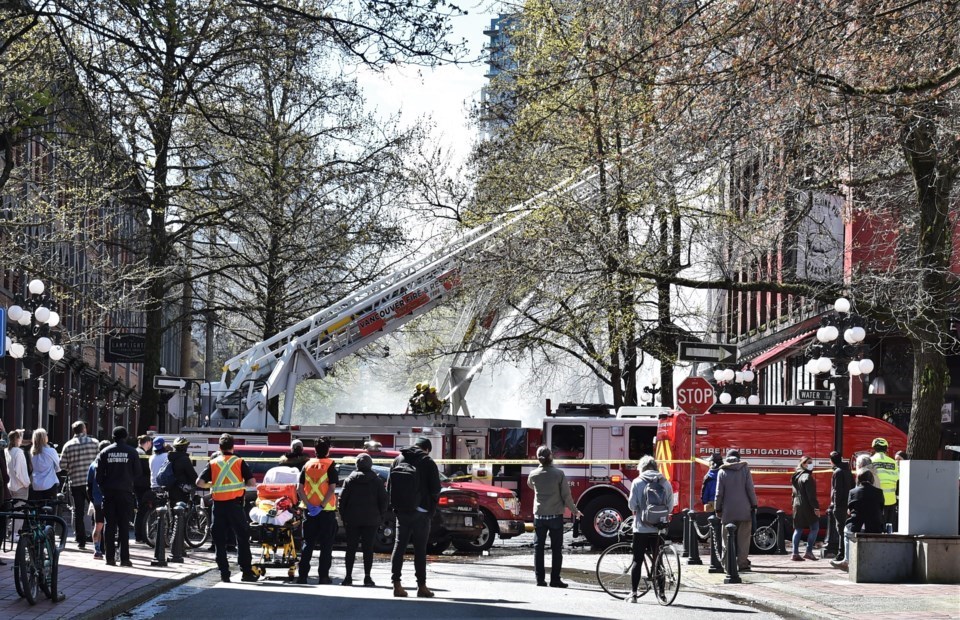 The City of Vancouver is working with various groups and agencies to implement strategies to reduce the risk of summer heat, poisonous drugs and fires for approximately 7,000 tenants living in single room (ORS) hotels.

“The ongoing COVID-19 pandemic, the summer 2021 heat dome, and the ongoing overdose crisis due to poisoned drug supply demonstrate the intersection of vulnerabilities that many tenants and SRO operators face for trying to provide safe and livable housing,” Sandra Singh said. , the city’s general manager of arts, culture and community services, in an Aug. 3 memo now posted on the city’s website.

Firefighters have already responded to 198 fires this year at ORS, including the Winters Hotel in Gastown in April where Mary Garlow, 68, and Dennis Guay, 53, died. Unattended candles in a suite caused the fire, investigators say.

Firefighters said they responded to 103 overdoses last week – the number of ORS calls was not immediately available – and the BC Coroners Service was due to reveal new data on Tuesday on the number of illicit drug-related deaths in the city. province.

Overdose deaths in SROs are not uncommon.

Data collected by Vancouver police over a four-year period showed that 50% of suspected overdose deaths in the city occurred in hotels and other low-income accommodations.

From February 2017 to September 5, 2021, police recorded 1,578 overdose deaths, including 33% in ORS and 17% in supportive housing, which is a type of housing where tenants have access to health care and basic services. other social services.

In last summer’s heat dome, 117 of the 619 heat-related deaths in British Columbia occurred in Vancouver. Almost all of the deaths occurred in a residence, with 10% in social housing, ORS or supportive housing, according to Singh’s memo.

“People living in socially and materially disadvantaged neighborhoods [similar to where most SRO hotels are] were more likely to die from a heat-related incident than the general population, with 33% and 28% of those who died, respectively, believed to have lived in these neighborhoods,” she said.

Singh added: “The majority of residents living in ORS have limited or fixed incomes and face multiple aggravating health conditions, including mental health and substance abuse issues, physical disabilities and weakened immune systems, which which makes them much more vulnerable to disease.”

In his note, Singh described some of the actions underway or in development to improve conditions in hotels, which are often the most affordable housing available for low-income people and a last resort for many before homelessness.

The answer to the heat of the city this summer:

• In June, City Council approved a $100,000 grant to the SRO Collaborative to mobilize tenants to provide education, support and services to 2,300 “at-risk tenants” in 43 private SROs.

• The Collaborative’s plan includes the purchase of materials, the preparation and distribution of cool packs and resources, and comprehensive first aid training for 100 tenant volunteers, including multilingual training.

• The city has also secured funding through the Vancouver Emergency Management Agency to acquire and distribute approximately 500 “cool kits” to vulnerable SRO tenants. The kits contain an indoor thermometer, a foot bath, a cooling towel, a vaporizer, cold compresses and a reusable water bottle.

• Non-market housing operators are funding the purchase and distribution of an additional 480 kits for the most vulnerable people living in city-owned housing stock. BC Housing distributes the kit to tenants in their housing portfolio.

• Vancouver Coastal Health has developed a three-step plan to support Indigenous populations and “priority populations” (which include people living in ORS and supportive housing) in the event of a heat-related emergency.

• Each summer, the city activates cooling centers, misting stations and shaded outdoor spaces in the Downtown Eastside and Downtown.

Prevention of overdoses in ORS:

• The city and VCH continue to provide funding to the collaboration to hire tenant workers for the Tenant Overdose Response Organizers program, which aims to prevent overdose deaths in private ORS.

• The program is currently active in 39 SRO buildings, and workers maintain and distribute harm reduction supplies, conduct naloxone trainings, and communicate with VCH and city staff on hotel overdose issues.

Many hotels already have overdose prevention rooms and supplies for tenants who use drugs.

• City staff met with BC Housing to share information on fires in OARs and identify opportunities to increase fire and life safety standards and training in BC Housing funded OARs.

• Firefighters planned to attend BC Housing’s “Non-Profit Supportive Housing Leadership Table” this month to share information and identify opportunities to collaborate with housing providers regarding the prevention of fires.

• Similarly, city staff planned to hold a workshop with major non-profit SRO housing providers such as Atira, PHS and Lookout to identify training and other measures to improve fire safety and life safety in ORS.

• Under a two-year pilot program, the city would support the collaboration to conduct a private ORS fire safety training and education pilot that would include multilingual training for Chinatown ORS tenants .

“The pilot would also support a multilingual fire and heat preparedness survey,” Singh said. “This survey would help identify the most vulnerable tenants in the stock who would need additional support and give a better understanding of the level of fire safety awareness among SRO tenants.”

The city’s ambitious long-term plan is to buy up to 105 private hotels and renovate them into safe, secure and affordable social housing.

A report from city staff that was presented to council in October 2020 said discussions were underway with senior governments to create a pooled investment fund to buy hotels, which would be expensive.

“Staff analysis suggests that Housing Vancouver’s long-term vision to replace all [single-room-occupancy hotels] with social housing at the housing rate would require a government investment of approximately $1 billion,” the report states.

This report included data on how average rents in private hotels had jumped 16% in four years, with the number of rooms available at the housing rate of $375 per month falling from 1,700 in 2003 to 77 the last year.

The majority of ORS are older heritage buildings that contain single 10ft by 10ft rooms, usually with shared bathrooms and kitchen facilities. The majority of Vancouver ORS are located in the Downtown Eastside and Downtown.

About 60% of SROs are non-profit or privately owned, and the rest are state-owned, with the East Hastings Street corridor dominated by BC Housing properties.