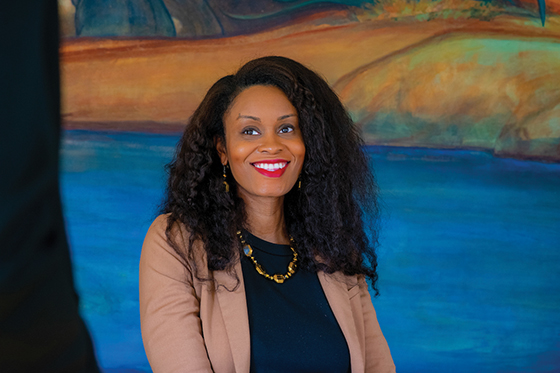 Wingate University’s MLK Awards, given annually to a student, staff member, and faculty member who live the civil rights activist’s legacy of service, will go to three members of the campus community .

Taylor Sligh, Marta Falcon and Geniece Crawford World will be honored during a virtual recognition on January 19.

The awards program is in its third year at Wingate and will feature a keynote speaker for the first time – Iyanna Salters, a social services major who will reflect on her experiences at Wingate and how they connect to King’s dream. The event is open to the public and will begin at 7 p.m. [email protected] to request the YouTube link.

Sligh, vice president of the Tau Chi chapter of Sigma Gamma Rho sorority in Wingate, is an integral part of programming efforts designed to unite students on campus. She is also the sorority’s regional youth services coordinator and is the highest-ranked undergraduate member of the organization’s northeast region, which stretches from Bermuda to Canada.

“Taylor Sligh is dedicated to serving and uplifting her campus community and the greater Wingate area,” student Taylor Patterson wrote in her nomination.
Sligh, who is known for her penchant for organization and collaboration, worried that growing racial strife and isolation induced by the 2020 pandemic would make it difficult for students to connect and empathize with each other.

In response, she planned We Are Wingate, a week-long celebration of diversity developed with input from more than a dozen organizations across campus. To pay for this, Sligh wrote a grant proposal for $7,210, the largest student-nominated grant ever funded by the Wingate Board of Visitors.

“Taylor has gone out of her way to apply for a grant,” Amanda Alling, assistant director of campus engagement at Wingate, wrote in her nomination. “She is a student who perseveres and who fully deserves this recognition.”

Nancy Randall, Wingate’s vice president for institutional integrity and Title IX coordinator who also nominated Sligh for the award, noted that Sligh recently hosted a regional program for Sigma Gamma Rho focused on social justice, specifically the Title IX, and collaborates in programming a Dating Violence and Sexual Assault Awareness and Prevention Week that will address issues affecting underrepresented populations, including people of color, the LGBTQ community, and women.

• In her spare time, Falcon, Assistant Director of Wingate’s Academic Resource Center, works with the First Generation Bulldog Program, Latinx and Muslim Student Associations, and the Bias Action Team. She was nominated by Kristin Wharton, Executive Director of ARC.

“Marta embodies the ideals of Dr. King in all aspects of her work. She constantly takes on extra duties because people on campus see her passion for equity and diversity,” Wharton wrote. “Being bilingual, he is asked almost every week to use his language skills to ensure access across campus. In her position, she supports students with disabilities so that they are able to demonstrate their learning. She always works with ARC facilitators to ensure that every student who enters ARC feels respected and valued.

• Monde, an assistant professor of sociology and chair of the department, was cited for supporting King’s legacy through her research, teaching and supporting Wingate students, especially students of color, according to Christy Cobb, a member of the faculty.

“This year, Dr. Monde was given a sabbatical to complete a book manuscript on formerly incarcerated mothers to recast their experiences,” Cobb wrote in his nomination. “This book, when published, will be one of the first to focus on the experiences of incarcerated women. Like Dr. King, Dr. Monde’s research sheds light on marginalization and inequality in American prison systems. Dr. Monde exemplifies the importance of black faculty at an institution like Wingate and deserves recognition for his mentorship, leadership, and scholarly research.

“I believe it is important to continue to recognize our faculty, staff, and students who make a conscientious effort to advance diversity, equity, and inclusion efforts at the university. Whether it’s in the classroom, making an appointment at ARC, or collaborating on a student organization program, these efforts make a huge difference in ensuring that all students and employees feel a sense of belonging and are welcome to campus.