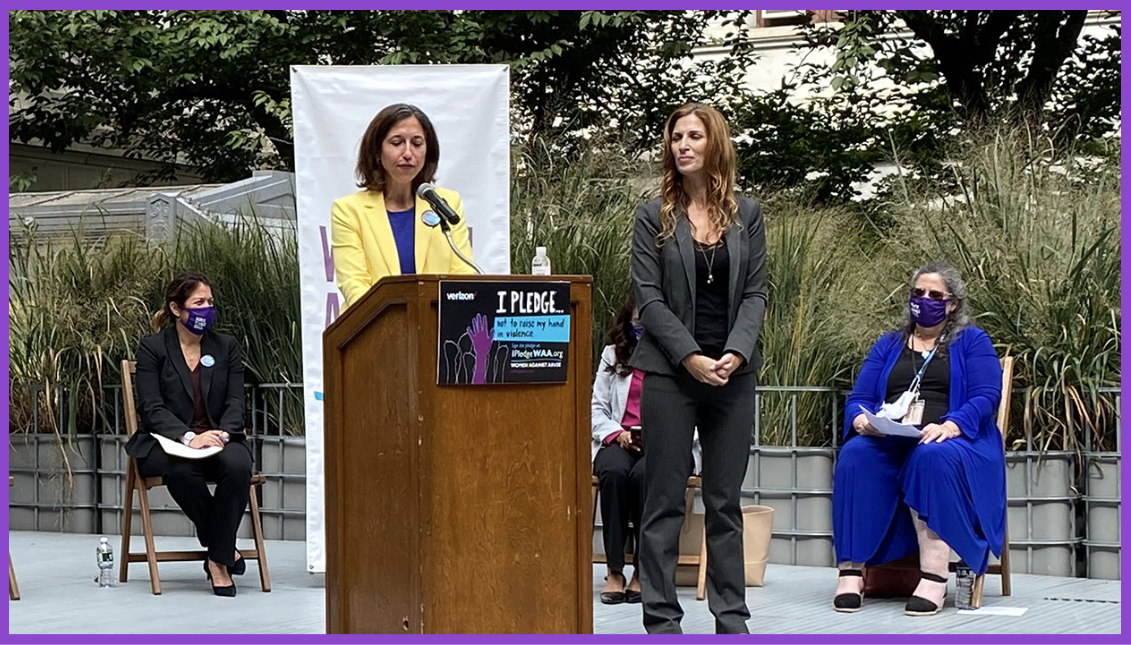 The event was organized by Dr Argie Allen Wilson, Founder and CEO of FAITH Inc. (Family and Individual Therapeutic Healing) and new board member of Women Against Abuse.

â€œThe Women Against Abuse iPledge campaign offers the community the opportunity to get involved in an effort to end domestic violence. And in the 2021 campaign, which we call ‘Safer Together’, we will highlight the significant obstacles refugees and immigrants face in trying to break free from an abusive relationship, â€said Dr Wilson.

Leslie Miller Greenspan, Chair of the Board of Women Against Abuse, further highlighted the unique challenges refugees and immigrants face when faced with abusive relationships.

Greenspan listed a few examples of what abusers often do, including destroying green cards, passports or immigration papers, not allowing the victim to learn English, threatening to deport them, threatening to separate them from their US-born children, and more.

â€œFor some survivors, these horrific tactics of abuse only scratch the surface of their lived experiences. And compounding this problem are the additional barriers caused by xenophobia, racism, language barriers and cultural constraints that can prevent a person from reporting abuse or seeking help, â€said Greenspan.

She then spoke of an important discovery from May 2019, when a coalition of national organizations gathered comments from nearly 600 attorneys and lawyers across the country.

They found that many immigrant victims of domestic and sexual violence were too afraid to call the police or go to court for help.

â€œInstead, they felt pressured to stay in the abusive relationship and try to survive the violence,â€ said Greenspan.

â€œThis work has been a collaboration with many partners. In addition to Women Against Abuse, Nationalities Services Center and HIAS PA are among these partners. I would also like to mention the other domestic violence agencies that continue to do this work in the city: Congress de Latinos Unidos, Lutheran Settlement House and Women in Transition, â€said Deputy Mayor Cynthia Figueroa.

Greenspan then presented the 2021 iPledge Social Impact Partner Award to the Nationalities Services Center (NSC) for his work in helping immigrants acquire language skills, obtain U and T visas, obtain citizenship, and more.

â€œToday, they serve 5,000 immigrants and refugees from over 100 countries around the world each year. They are multilingual, culturally appropriate and take trauma into account. The Wellness Transition program serves immigrant survivors of domestic violence, â€she said.

â€œIt truly is a lesson in humility to receive this recognition from Women Against Abuse, a pioneering organization and leader in addressing the violence that exists in far too many of our homes in our city. This year we are celebrating our 100th anniversary and we are delighted to do so for another 100 years, â€said Nogales.

NSC began partnering with Women Against Abuse in 2005 when it launched the Domestic Violence Project, an initiative to ensure that surviving immigrant women have access to immigration legal services.

This program, according to Nogales, currently offers legal services, case management, on-site therapy and wellness activities, among other services.

The final winner of the award was HIAS Pennsylvania, a nonprofit organization that provides immigration legal and a range of social services to low-income immigrants of all backgrounds.

Speaking of the unique obstacles faced by immigrant victims of domestic violence, Miller-Wilson said, “It literally makes them prisoners of their abusers because of the issue of legal status.”

â€œIt is really important to have these specialized services and we are extremely grateful to have the opportunity to partner with Women Against Abuse, which is on the front lines of dealing with survivors of domestic violence from all places, from all backgrounds. economic strata, from all educational strata, and of course, from all countries, â€said Miller-Wilson.

In conclusion, Dr. Allen Wilson guided the crowd through the engagement.

â€œI am committed to acting as an advocate for healthy relationships. I will believe the survivors of relationship abuse and amplify the voices of those who have been silenced. I will actively work against oppression and commit to being part of the change needed to create a safe and just community for everyone.

Those who want to make the pledge can do so at ipledgeWAA.org.