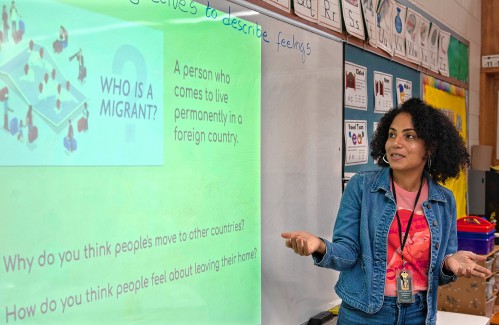 AMHERST — Coming to Amherst from Afghanistan in January, Crocker Farm School fourth-grade student Suliman Monmad says he misses his homeland, even with the dangers his family poses to “bad people.”

Suliman expresses a range of emotions about getting to a safer place and how, as a newcomer, he feels “excited, confused and then sad”.

“I’m glad you’re safe and here,” says Nadla Tavares Smith, an ESL teacher at the school, as she works with Suliman, and two others, student Maria Clara Francas. third-grade student from Brazil, and Jiahao Lei, a fourth-grade student from China, as they reinforce their English skills during a group class.

During her second day at Crocker Farm, Maria tells her teacher in Portuguese why anyone would be happy, how she has already made three new friends, and then, in English, how new to school seems already “normal”.

As an immigrant from Brazil who learned English herself, Tavares Smith draws on her own experience when teaching. “I still struggle with a lot of words,” she told the students.

But she then explains that they will be more comfortable practicing English, while giving them the opportunity to greet each other in their mother tongue. This greeting, she said, can serve as a way to welcome new students, suggesting that students come together to create a welcome sign for the school hall.

For her work improving students’ language skills, connecting with their families, and building school community, Tavares Smith is honored with this year’s Roger L. Wallace Award for Excellence in Teaching, given annually to an elementary school teacher in Amherst or Pelham since 2013. .

Retired educator Andrea Battle, a board member who helps coordinate the event named after the Fort River teacher who retired in 2012 after 39 years as a teacher, said that Tavares Smith represents the best of Amherst and Pelham elementary schools.

“She is notable for social justice and her concern for immigrants and makes them feel comfortable in the community,” Battle said.

A letter of nomination from parents and teachers stated that Tavares Smith is not only an excellent teacher, but promotes and appreciates each student’s cultural identity. “She’s really good that way, and very empathetic because of it,” Battle said.

Tavares Smith has worked on social justice standards, interaction with families and anti-bias education with staff. Last year, she hosted a Black, Indigenous, and People of Color (BIPOC) affinity group that met after school

One key, she said, is to respect the student’s identity, noting that she never identified as Latina until arriving in the United States.

“Students need to catch up in terms of literacy, and I focus on reading and writing and creating the conditions for them to talk about their own experiences,” Tavares Smith said. “They are developing a new identity.

Born and raised in Bahia, Brazil, to a single mother and one of six children, Tavares Smith said she has been committed to social justice all her life, recalling the disappointment of having labs closed computers when she was a child. Her spark for education began in a secondary education program for youth and adults.

She then taught undergraduate at a private school, a public school and a language school in Brazil, focusing on Portuguese, Spanish and English. “Fairness drove me at that time,” Tavares Smith said.

Tavares Smith came to the United States in 2011 on an exchange program, staying in Stowe, Vermont, with friends, and it was there that she met her future husband. She lived in Ireland for a year and also in Switzerland, coming to Massachusetts when her wife got a job as a private chef in Leverett.

In January 2013, she started as an interpreter at Amherst Regional High School, at which point she was inspired to pursue a master’s degree in multicultural education, which led to her being promoted to paraeducator. In 2017, she landed an ESL position in college, and a year later was offered the same role at Crocker Farm.

“I love working with the little ones,” said Tavares Smith, observing that she coordinates projects with Blanca Osorio-Castillo, her colleague who achieved similar recognition in 2019.

The beginner group of three children who are removed from their regular classes will receive instruction from her throughout the day, focusing on writing, grammar, syntax and vocabulary development. She said many students already have strong skills in their native language.

“We should consider their literacy and language as an asset,” Tavares Smith said. “I teach from an asset-based perspective where we can use what they know in their native language to develop their English.”

Her day also includes a block where she will be teaching English for daily interaction, reading with fourth-grade middle school students, and ‘push’ work where she joins the class alongside the students. As students learn more English and become more comfortable with their skills, they will have fewer take-outs and more of those push-ins.

A big part of her day is also about observing students’ progress, making sure they are learning and understanding. “A lot of students aren’t in the same place on their journey,” Tavares Smith said.

It’s also important to connect with families, although she understands that some parents and guardians work multiple jobs.

“I want students’ families to be seen, heard and involved,” said Tavares Smith.

“He is an inspiration to us and I admire him a lot,” Tavares Smith said. “I feel so honoured.”

Tickets for the ninth annual dinner, taking place Oct. 30 from 5 to 7 p.m. at Willet’s Hallowell Conference Center at Mount Holyoke College, are $25.

Scott Merzbach can be contacted at [email protected]

Date Lab: Her southern accent at first confused her