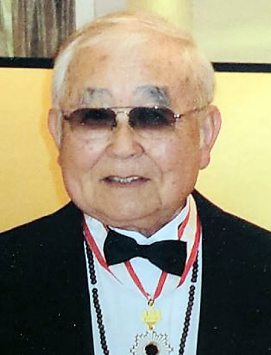 Dr. Jack Fujimoto Square will be dedicated to Sawtelle Japantown

Dr. Jack Fujimoto Square will be dedicated on Sunday, October 23 at 11 a.m. at the southwest corner of Sawtelle Boulevard and Mississippi Avenue in Sawtelle Japantown.

Residents, friends and neighbors will join in celebrating the past, present and future of Sawtelle Japantown.

A reception will follow immediately in the parking lot of the Japanese Institute of Sawtelle, 2110 Corinth Ave. There will be a free raffle with prizes. Street parking is available.

Fujimoto, a respected community leader, died in 2021 at the age of 93.

Dr. Masakazu Jack Fujimoto was born in National City, California in 1928. When he was 13, he and his family were forcibly transferred to the Poston War Relocation Center, an internment camp in Arizona. The Fujimoto family was liberated in 1945. After graduating from high school, Dr. Fujimoto served in the United States Army in Japan during the Korean War.

After returning from the Korean War, Dr. Fujimoto moved to Los Angeles to attend college. While working at a gas station in the Sawtelle area, he met his wife Grace Fusaye Toya, whom he married at the West Los Angeles Buddhist Temple in 1956. Dr. Fujimoto went on to earn his bachelor’s degree, his master’s and doctoral degrees, all from the University of California, Los Angeles. Dr. Fujimoto then taught Japanese language at Venice Gakuen, a private school of the Vcnice Japanese Community Center.

In 1969, Dr. Fujimoto was selected to serve as Dean of Los Angeles Pierce College in Woodland Hills, where he established Japanese language and other humanities courses in East Asia. In 1979, Dr. Fujimoto began working as president of West Los Angeles College, where he again introduced and taught Japanese classes, repeating this in 1989 when he became president of Los Angeles Mission College in the San Fernando Valley, a role he would play. hold out until 1996.

Dr. Fujimoto has also been actively involved with the Japanese Institute at Sawtelle since 1986 and helped orchestrate its merger with Sawtelle Gakuin, a Japanese language school. He then served as founding president and president of the Japan Institute at Sawtelle until 2005, continuing thereafter to serve as a senior adviser to the institute. Dr. Fujimoto also chaired the board of trustees of the Institute of Buddhist Studies, a seminary affiliated with the Graduate Theological Union in Berkeley, California, from 1983 to 1995.

In recognition of Dr. Fujimoto’s citywide accomplishments and his lifelong promotion of Japanese culture, history, and language, it is fitting that the city name the intersection of Sawtelle Boulevard and Mississippi Avenue, near the Japanese Institute of Sawtelle, such as Dr. Jack Place Fujimoto.

I therefore propose that the intersection of Sawtelle Boulevard and Mississippi Avenue be named Dr. Jack Fujimoto Square and that the Department of Transportation be directed to erect permanent ceremonial signs to that effect at that location.

Statements in support of the motion included the following.

Len Nguyen, Former Field Deputy for Council District 11: “I am writing today to enthusiastically support CF 22-0515 to establish Dr. Jack Fujimoto Square at Sawtelle Blvd./Mississippi Ave. at Sawtelle Japantown. Dr. Fujimoto was a beloved community leader and was one of the driving forces behind the Sawtelle Japantown community designation. Jack has always supported the community at Keiro Kai celebrations, Sawtelle Gakuin graduations and the West LA Obon Festival. This memorial square is a wonderful way to honor Jack’s legacy.

Professor Valerie Matsumoto, George and Sakaye Aratani Endowed Chair on the Japanese American Incarceration, Redress, and Community, Department of History/ Department of Asian American Studies, UCLA: “Thank you for your motion to name the intersection of Sawtelle Boulevard and Mississippi Avenue Dr. Jack Fujimoto Square in Honor of a Dedicated and Influential Educator and Community Leader I am writing to support this timely motion.

“In addition to his many accomplishments as a Japanese language teacher and university administrator, Dr. Fujimoto had an in-depth knowledge of and love for the Sawtelle community. He has worked with the Japan Institute at Sawtelle for more than three decades. and played a pivotal role as president and advisor.He also documented the history of the community in his gripping book “Sawtelle: West Los Angeles’s Japantown” (2007).

“Honoring Dr. Fujimoto by naming this bustling intersection would serve as a reminder to the Japanese-American community of Sawtelle, as well as Dr. Fujimoto’s significant contributions to organizations that have kept his culture and spirit alive.”

How the Norwalk Middle School Choice program will work