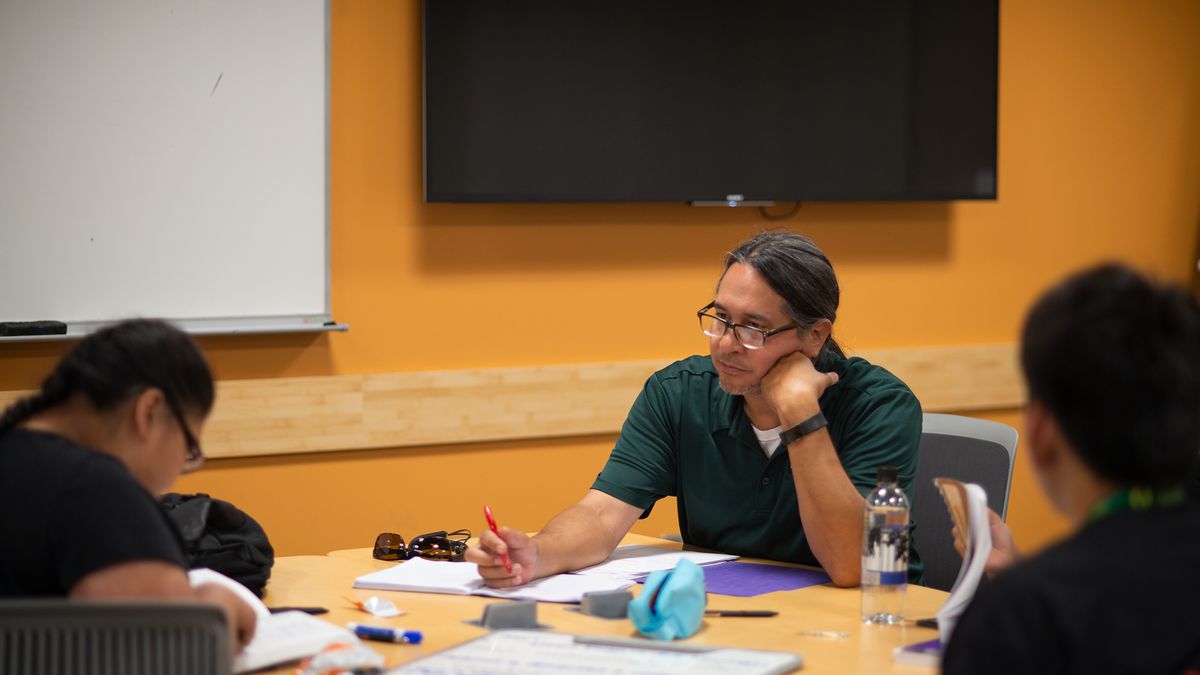 Decades of government policies to forcibly assimilate Native Americans, guided by the notion of “kill the Indian and save the man,” have included generations of Native children torn from their families and placed in boarding schools, where to speak their language was forbidden.

The cumulative result has been the severe decline and, at times, complete loss of Indigenous languages ​​in North America.

This legacy served as the backdrop for the formation of the Northwest Indian Language Institute in Oregon in 1997. Twenty-five years later, the work of the institute remains as urgent and important as ever.

“We often ask ourselves, ‘How can we address the pain that people have and the shame that they have about language?’,” institute director Robert Elliott said recently from headquarters. of the organization in Eugene.

Ichishkíin language teachers from the Confederated Warm Springs Tribes and the Yakama Nation founded the institute in response to tribal communities’ interest in honoring and maintaining their languages. Inspired by the Native American Language Development Institutethe founders worked with the University of Oregon to start their institute, dedicated to supporting and strengthening language revitalization through tribal, academic, and community partnerships.

Over the past 25 years, NILI has been committed to establishing and providing language programs, teacher training and language documentation. She has created programs and collaborated on projects aimed at meeting the needs of linguistic communities in danger. For many Indigenous peoples, language is integral to identity, culture and healing.

“Being able to really experience a language isn’t something about reading a textbook or something you only do in a classroom; it’s about people and being motivated to learn a language because you want to connect with people,” Elliott said. “We are open to working with all the tribes around. People came from all over the Pacific Northwest, even from places as far away as Mississippi, Oklahoma, Florida, Canada, New York, Hawaii, so everywhere. NILI is open to anyone who wants to learn.

Many tribal families fell victim to American Indian residential schools, also known as boarding schools, where Indigenous children were placed after being taken from their families. Hundreds of thousands of children were punished and often beaten for using their native language, a brutal attempt at forced assimilation by the US federal government that lasted until the 1960s.

“That’s one of the reasons for language loss, isn’t it, because many elders didn’t want to pass on the language because it caused them a lot of pain in life,” Elliott said. . “And they were told it wasn’t useful or useful, so they didn’t teach their children, because they didn’t want them to have the same problems as them. So it becomes this ideology that your indigenous language or your indigenous language is harmful or bad or useless, and yet you’re lost, because it’s part of your identity.

Programs like NILI help heal the trauma caused by the devastating effects of assimilation through language revitalization and preservation efforts.

“Every tribe is different; every language situational context is different,” Elliott said. “I think the first thing people need to understand is the value of language. So to stand up and say “my language is valuable and I want to learn it, and I’m going to speak it” – that, to me, is like the ultimate rebellion against the powers that be.

The institute is a partner of the university and operates under the direction of an advisory board made up of indigenous members. Faculty and staff operate from the NILI building on campus when needed, but there are currently no full-time staff. The program operates on a small budget and depends on the generosity of outside donors.

According to his websiteNILI is one of a handful of programs that play a role in attracting, retaining, and educating Indigenous students at UO.

NILI operates as a year-round program, but is particularly proud of its Summer Institute, which is open to participants from local, national and international Indigenous communities. The Summer Institute provides a space for everyone to learn Indigenous language teaching strategies and language materials, and helps create teaching materials.

Due to the COVID-19 pandemic, NILI’s Summer Institute and similar in-person programs have undergone massive reconstruction. Prioritizing the protection of the elderly and vulnerable populations from the ongoing health challenges of the pandemic, NILI has made the decision to move forward this year with an online-only program for the third consecutive summer. The Summer Institute ended on July 1st.

“Before the pandemic, the NILI house was teeming with students and the projects they were working on and offered plenty of opportunities for anyone to get involved – and post-pandemic we have yet to pick up the pieces,” said Elliott. . “I always feel like we’re broken there, and I walk in and it’s empty all the time. It’s just awful.

Allyson Alvarado, who goes by the name of Tayksíki, of the Confederate Tribes and Bands of the Yakama Nation, is currently an OU graduate student and says NILI played a major role in recruiting her to the school.

“I had several different options for school, but none of them had the strong indigenous community like UO and NILI,” Tayksíki said. “They always told me that I could study at NILI, enter the ‘house’ and work there. They were always supportive, always asking me how I was or what was going on. It’s just a very inclusive environment.

Tayksíki lives with Virginia Beavert, also known as Tuxámshish, who is a Yakama Nation elder and one of the original founders of NILI. Beavert, who turned 100 in November and has played a key role in shaping the institute over the past 25 years, is a highly respected teacher and is fluent in her tribal language, Sahaptin. She currently sits on the advisory board of NILI.

“I feel very privileged to learn from Tuxámshish, but it’s also a great pressure because people always ask, ‘Do you know how lucky you are?'” Tayksíki said. “But she is really helpful and encouraging. She will tell me to stop focusing on the linguistics of the language and just speak it without thinking too much about it. I feel very lucky to live with her and learn from her.

Recognizing the impactful and important work that NILI has done over the past 25 years, the Roundhouse Foundation announced a grant this year that will support innovative new outreach and language programs for Oregon’s tribes, including conducting a needs assessment, trips to publicize NILI and more.

“NILI plays a vital role in this,” Borla continued, “and as they enter the next phase of their organization, we are pleased to support their efforts to connect authentically with the tribal communities they serve. so that they can deeply understand how to enrich their program.

The funding will help NILI connect with more Oregon tribal language leaders and tribal partners throughout the Pacific Northwest, as well as existing institute members.

“What (Roundhouse has) done is they gave us a way to get out and visit each tribe, maybe host them for food and bond,” Elliott said.

The grant offers the opportunity to create new approaches to understanding the linguistic needs of tribal nations, while helping the institute strengthen relationships within these communities, in addition to supporting current preservation efforts. This will help NILI envision its next 25 years of working with all levels of language proficiency, from new learners to fluent speakers.

Tayksíki notes that while it may seem overwhelming to start learning a traditional language, “even if you speak the language a little or try, that’s a lot in itself.”

“So just have a positive mindset and know that you don’t have to be at a native speaker level,” Tayksíki said. “You can be at your own level, or you can just work to speak the language and know enough is enough.”

“I feel like by learning your language, you see the world as your ancestors saw it,” she continued. “And so I think it’s really important to keep in mind: languages ​​are connected and intertwined with our cultural practices…I probably wouldn’t be where I am today without NILI and all the people who are come out of NILI. My past language teachers are products of NILI and brought us together, and I’m really happy about that.

McKayla Lee attends the University of Montana and is the first recipient of the Underscore Indigenous Journalism Fellowship.

Underline is a nonprofit collaborative reporting team in Portland focused on investigative reporting and coverage of Indian country. We are supported by foundations, corporate sponsors and donor contributions. Follow Underscore on Facebook and Twitter.