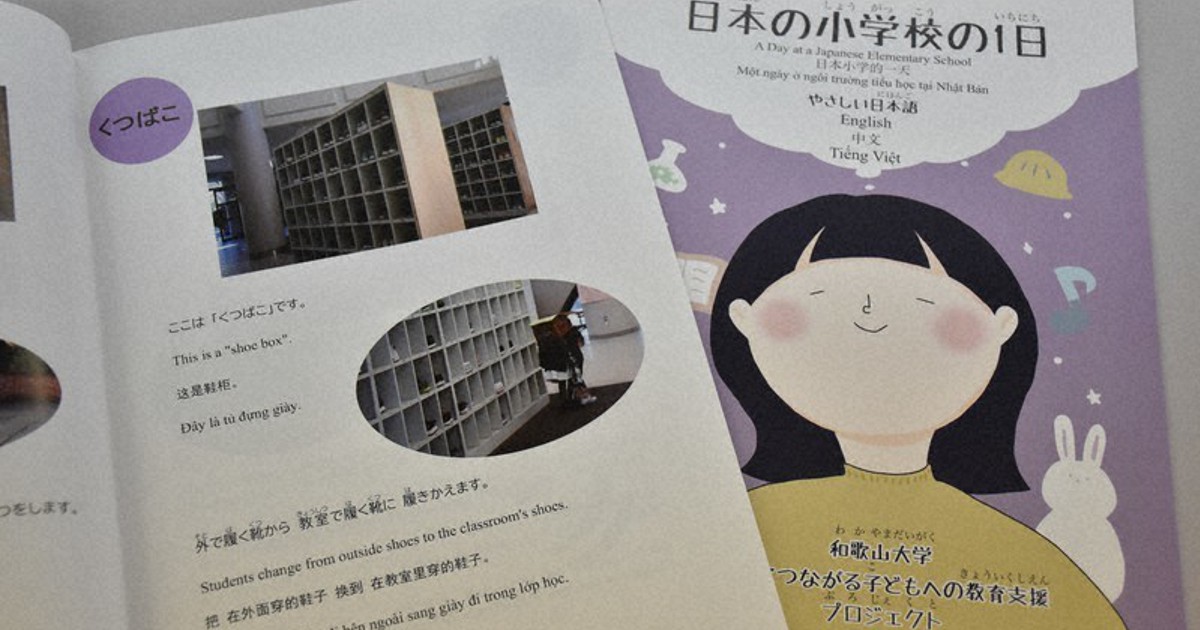 WAKAYAMA — A group of Japanese and foreign students from Wakayama University have created a video and booklet introducing Japanese elementary school terms and culture to children of foreign backgrounds using easy-to-understand Japanese. .

Overseas children who are enrolled in schools in Japan often tend to feel confused about differences in customs, such as wearing indoor shoes, taking turns serving school meals, and use of a notebook for communication between teachers and parents.

The students behind the project hope that the video and multilingual brochure will help allay, if only a little, the concerns of children of foreign origin and their families about school life in Japan.

“It’s a shoebox. The students switch from outdoor shoes to classroom shoes,” says the narration of a scene from the video titled “A Day at a Japanese Elementary School.” The approximately six-minute sequence uses “easy Japanese” and avoids difficult expressions to explain the flow between arriving at school and leaving for home for children and parents unfamiliar with the Japanese language.

The student group, made up of young Japanese and international students from China, Vietnam and Malaysia, focused on the fact that there are a growing number of children of foreign origin in Japan, and helped these children through a project they started in the 2020 school year.

Ayako Nagatomo, professor of Japanese language education and director of the Center for Japanese Studies at Wakayama University, gave advice to the group of students. “When foreign children enter a primary school, they often encounter things and events that make them wonder why. If they could understand these questions before they enroll, it could make their life here easier.”

While making the video and brochure, members of the student group visited an elementary school in Wakayama City to learn about the different cultures of school life that children of foreign backgrounds are likely to face. , comparing them to those of the countries are from the foreign students of the group.

One of the examples of these differences is the way teachers mark exam papers. In Japan, a tick means “an incorrect answer”, while the same mark means “a correct answer” in China. In Malaysia, there is no school canteen system and students must either bring their own bento boxes or buy food from the canteen.

The video explains that “In Japan, a circle is assigned to a correct answer, while a check mark is used for an incorrect answer” and that “Students who serve lunch at school wear white coats and caps. “The group of students tried to carefully convey the school rules which vary from country to country.

In addition, international students translated these explanations into English, Chinese and Vietnamese and created a 29-page booklet in four languages.

Muhammad Irfan Danial, 22, a Malaysian student studying at Wakayama University’s School of Systems Engineering, visited a Japanese elementary school to gather information for the project and was overwhelmed by so many differences with life school in Malaysia.

“I worried if children from foreign countries could get used to schools here,” the third-year student said.

Yu-ka Yamamoto, 20, from the faculty of tourism at the same university, told the Mainichi Shimbun: “I would be happy if the materials we produce help ease children’s anxieties, even if only slightly. , and made them feel that Japanese schools look fun.”

The video can be viewed on the university’s Kii-Plus project YouTube channel. There are 500 copies of the multilingual booklet, which will be distributed to children and parents in need through the Wakayama municipal government and other agencies. The brochure can also be downloaded free of charge from the Kii-Plus project website.

Among the children of foreign origin, there are often those of Japanese nationality who previously had a foreign nationality, and those whose parents have a foreign nationality. In Wakayama Prefecture, there were 55 students requiring Japanese lessons in May 2021, according to a survey by the Ministry of Education, Culture, Sports, Science and Technology.

Too much screen time linked to ADHD, aggression, anxiety in children