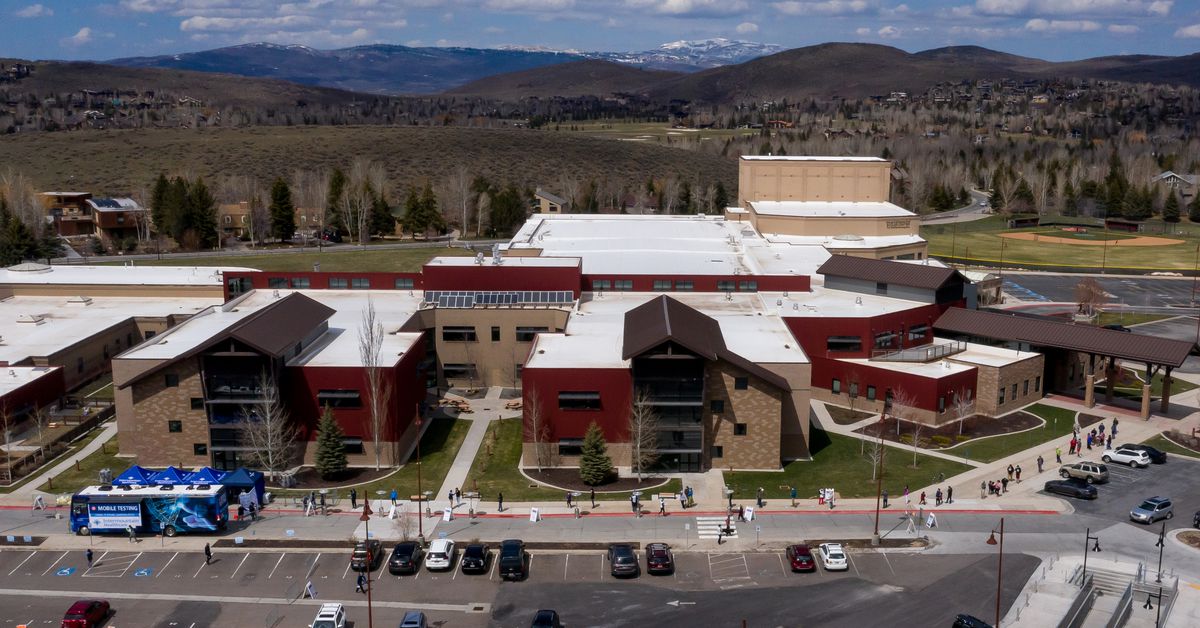 According to a letter to the school community from PCHS principal Roger Arbabi, there have been “multiple incidents” of hate speech in recent weeks at Park City High School.

“Hate speech appeared in the form of swastikas and racial slurs in several places,” the letter said.

Josh Goldberg, a social studies teacher, said one of his students discovered a swastika and the N-word on the bottom of a desk in his classroom.

“Was it targeted? I mean, I’m a Jewish teacher. I run a Jewish student club in this classroom. It created major, major waves now,” he said.

Since word spread about expressions of hate at Park City High School, Goldberg said he has received at least 50 emails from students, parents and community members sharing numerous incidents of hate, racism or other unwelcoming behavior that occurred in high school and other district schools. .

When he got his first glimpse of the graffiti under the desk, it was “incredibly painful”, he said.

He immediately reported it to the school administration, who promptly removed him from the desk.

Then Goldberg used the incident as a learning opportunity for his students “where we talked about an intolerance to hate speech, the pain and the story behind the symbol”, which in the United States is widely seen as a symbol of hate.

According to Anti-Defamation League, the swastika is an ancient symbol that has emerged independently among many cultures on several continents. Prior to the 20th century, its use was almost always benign.

When Goldberg addressed his students, “it was dead silence. People were devastated. Children come to me crying, I mean children who are not even my students. They don’t know where to turn. They have no one to turn to. I mean, people are scared, people are scared and people are hurt,” he said.

Arbabi’s letter further stated, “As a community, we have zero tolerance for language or imagery that expresses hatred toward any person or group on the basis of religion, race, disability, gender or sexual orientation”.

The letter urges stakeholders to report any hate speech observed at school to an administrator, a trusted adult or through the SafeUT app.

School administrators, together with counselors and teachers, will work to provide “learning opportunities for our students to identify and stop hate speech,” Arbabi wrote.

Goldberg said some of his fellow teachers spoke to their students about the incidents, for which he was grateful.

Effectively responding to hate will require many partners, he said.

“I very much appreciate Mr. Arbabi’s response. I think the only way to get through this is to partner up, whatever organizations we’re talking about, representing Latinos, LGBTQ-plus, Jewish communities, everyone, LDS communities. We really need to come together to fight hate. We have to start somewhere. I look forward to working to do everything I can to educate and bring about major change here,” he said.

Goldberg said the experience in her class was deeply personal because “most of my family members were murdered in the Holocaust.”

In his more than 20 years of teaching, “I took those lessons with me and taught all of my students over the years. … Students know what kind of culture I’m creating in my classroom, and they know there’s no tolerance for it. In fact, I teach the opposite. It was a very painful attack that hit me to the core of what I consider sacred work. It took me days to process and deal with this. I am very grateful for the support of my fellow teachers and many students,” Goldberg said.

The Park City School District serves about 5,000 students, of whom 20% identify as Latino, 8% are English learners, 7% have disabilities and 22% are eligible for a free or reduced price lunch, according to the district’s website. .

A statement from Park City School District Superintendent Jill Gildea said in part, “When an incident of racist language, hate speech or negative messaging occurs, that action goes against everything what our schools stand for; it is completely contrary to our core values, our vision and our goals as a learning organization. It’s hurtful for everyone. »

He notes that the school district is working to support students and staff who have been impacted by the incidents, and “we want to assure every student and employee that we are committed to safety and well-being.

“Any incident such as racist messages is further evidence of the pressing need in our schools, our community and our nation to find ways to speak constructively and respectfully about diversity, religion and race,” said Gildea.

She said she was encouraged by staff and student efforts “to lean into difficult conversations about race by creating a task force to further research, review and generate action plans that stop the rhetoric. or intolerant behavior in its tracks; share how they are personally affected by racism; and contribute to our work to provide schools that are safe, supportive, engaged, stimulating and healthy – and where every student feels a sense of belonging.

Goldberg said the graffiti under the desk was symbolic for him. If there is hatred or intolerance that has been unleashed for whatever reason, “the longer we let it fester, the longer we ignore it, the more powerful and the worse the evil will grow.” So we have to face evil, you know, where it’s at, and to me, that’s a hill worth dying on.

He has deep convictions about his faith, his history and his culture. Goldberg served in the IDF “not to oppress anyone but to stand up for what I believe to be right.”

As a father and educator, Goldberg said he was bound to seek change.

“I can’t leave the broken world without knowing that I did my best to fix it,” he said.

Everything you need to know about IELTS