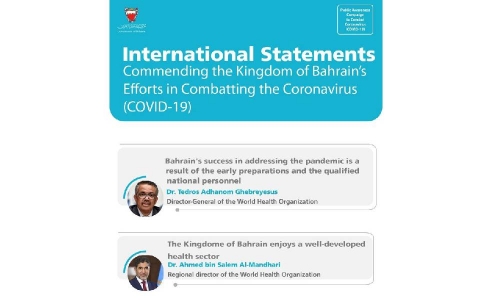 The World Health Organization (WHO) has praised Bahrain’s successful strategic response to cushion the negative impact of the COVID-19 pandemic.

WHO Director-General Tedros Adhanom Ghebreyesus highlighted Bahrain’s comprehensive approach to preventing the spread of the virus, saying: “Bahrain’s success in fighting the pandemic is the result of early preparations and national staff qualified”.

“The Kingdom of Bahrain benefits from a well-developed health sector,” Dr. Al Mandhari noted. Their statements were part of a report that outlines the Kingdom’s strategic response to the pandemic as well as its achievements.

WHO has documented the most notable achievements, including the formation of an integrated national team to fight the pandemic, the launch of a multilingual national campaign to raise awareness in the community, the implementation of a testing policy, follow-up and treatment, and the development of national testing strategies. for quick access to existing cases and contacts.

He also said that Bahrain has increased the capacity of public health laboratories to detect existing cases and used modern technologies to communicate with existing cases through the application of a conscious society.